All over the world, corals are dying. Some have already disappeared forever due to pollution, rising sea temperatures or overfishing. Marine biologist, Dr. Bry Wilson, is on a mission to find out why some corals are more resilient than others from a whole new perspective – the cellular level – and how we can genetically identify weaker corals before they die.

Dr. Bry Wilson of the University of Oxford has always had a passion for natural science. “I was brought up on Cousteau's voyages by my father, who was a diver himself.” He was always fascinated by marine environments. ”I don't just mean idyllic white-sand beaches, but also the rugged frozen north and the surging seas of the southern oceans.” So it was no wonder Wilson pursued a career in marine biology.

In 2005, after reading about the spread of coral diseases, he impulsively packed his bags and flew to the other side of the world to research the impact of disease on the Great Barrier Reef. Since then, saving the corals has become his life’s work. “I've had the good fortune to work in reefs in the South Pacific, Southeast Asia, the Great Barrier Reef, and even off the Norwegian Continental Shelf,” he says.

Coral is not the most straightforward subject matter to study, though. They exist in “this incredibly beautiful symbiosis” with the organisms that live in and around it, says Wilson. “They have representatives from essentially every single kingdom nestled within a single coral colony - viruses, bacteria, archaea, fungi, protozoa and then on top of that, you've got the coral itself, which shares this extraordinarily intimate relationship with the intracellular algae that live within it. Fish and crustaceans such as crabs and shrimp that live within the colony bring their own little microbial parties to the coral holobiont. Corals are immersed in this incredible microbial soup. It’s an extraordinarily difficult system to work with.”

Dr. Bry Wilson, marine biologist and bioinformatician at the University of Oxford Department of Zoology, is fascinated with the elusive Chagos brain coral, Ctenella chagius. “I just saw this big, beautiful-looking brain,” he says, reminiscing about his most recent field dive. “My heart was in my throat. I gulped through what little air I had left, like a kid.” Unfortunately, various corals, including the Chagos brain coral are still dying out around the majority of the globe. Wilson is using molecular testing to find out why some are more resilient than others. But how can this information be used to stop corals from further dying out?

Corals are immersed in this incredible microbial soup. It’s an extraordinarily complex ecosystem.

But the corals’ complexity is what compels him. “Trying to tease apart what’s going on in that crazy chaos is something that drew me in.” It’s essentially a metagenomic analysis “because in a system this complex, you're never pulling out just the genome of a single organism. It's a huge jigsaw puzzle that has to be solved when you're doing genomic assemblies.”

While all corals are at risk, some are more resilient than others. And Wilson wants to find out why. “By using molecular tools, we can examine the DNA of these particular organisms and these very complex communities.”

“We’re looking at certain immune genes to see whether they’ve got differences in their systems and whether that’s giving them better resilience to heating events.”

Wilson and his team use an old North Sea firefighting ship as their research vessel while in the field. “Our field season is limited to about a month a year when the trade winds subside to allow us to have a fairly comfortable seagoing voyage,” Wilson explains. To create a cool refuge for RNA and DNA sample processing in the sweltering humidity and heat of the tropics, they built a lab on the deck out of a shipping container. It holds an air conditioning unit, a small freezer stocked with ice packs, a fridge, a worktable and benches. It’s equipped with a centrifuge, various lab paraphernalia and molecular testing tools, including a variety of QIAGEN kits, including buccal swab kits, blood kits and plant and soil kits.

Wilson has been incorporating molecular testing into his coral research since early in his career. When reports of diseased corals began appearing in scientific literature, he investigated the impact of the pathogenic bacterium Vibrio coralliilyticus (“coral dissolving” in Greek) on the Great Barrier Reef and in the South Pacific. In the course of that work, he developed a real-time PCR diagnostic assay for checking levels of an enzyme that the bacterium used to break its way into the coral tissues, potentially revealing whether a coral was infected before it showed symptoms. Since then he’s used molecular testing and bioinformatics to understand corals’ genetic responses to a range of threats, from pathogens to climate change.
icon-cta-blockquote2

At the moment, there are so many things that are affecting coral reefs all around the world.

RNA from reef to raft

A major issue with extracting DNA from environmental samples is the downstream processing, he says. “It's the inhibitors, the contaminants that are part of nature, and the chaos of the samples that affect the things that we do downstream, in particular the polymerase chain reaction, or PCR. One of the things that QIAGEN has done an excellent job of doing is using reagents that actually release and sequester these things that prevent us from amplifying DNA. Corals, in particular, are a major source of concern because they're such a complex mishmash of different organisms.”

Wilson even does some sample processing underwater, right at the reef. “I chisel off a tiny bit of coral and put it into a Ziploc bag underwater, and then we ascend and get back to the boat as quickly as we can usually within 10 or 15 minutes.” Sometimes he processes a sample while bobbing in one of the rafts they use to access reefs the vessel can’t reach.

He uses a proprietary RNA stabilization reagent that essentially freezes molecular time. “Pipetting 100 microliters of a compound or chemical when you’re in an inflatable boat in a two-meter swell is a challenge,” he says. Still, it can be critical because microbial and endosymbiotic communities can change drastically over a period of hours due to changing temperatures or conditions. 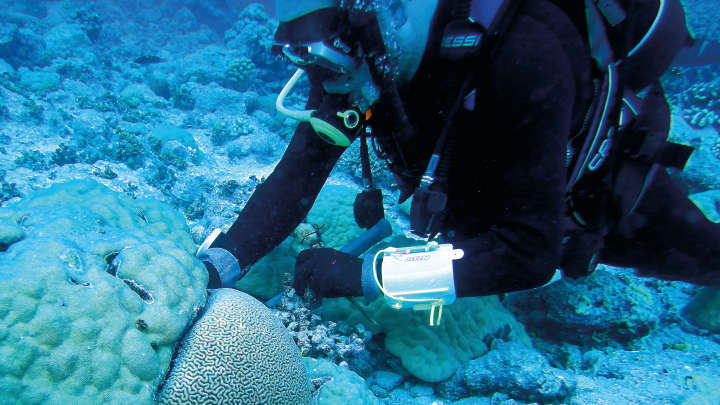 In 2019, Wilson chipped off a tiny piece of coral from a deteriorating specimen that he thought could be the elusive Chagos brain coral. But only molecular testing could confirm that this coral was, in fact, that species – previously thought to be extinct. He received a research grant from QIAGEN, which he used to fund the sequencing of the sample. The item was shipped to Hilden via Oxford and the results arrived a couple of months later. It was indeed the elusive Chagos brain coral. “My mind was blown before I even looked into the genomic data,” he says. “I had this unique opportunity to be the first person on this planet to delve into the recipe of life for the world's rarest coral. There are almost no data on this coral at all, until now.”
icon-cta-blockquote2
By using molecular tools, we can actually examine the DNA of these particular organisms and tease apart these kinds of very complex communities.

A classically derived metric for gauging coral health is color. The bone-white hue of a damaged or dead coral reef is caused by coral bleaching. Environmental stresses like heat or pollution cause the coral to expel their colorful microscopic algae. Corals can starve to death without them.

But molecular testing can reveal what’s going inside the coral genome before a bleaching event occurs, says Wilson.

“We can use molecular tools to look at genes and see how these are being switched on and off. We can see these stresses long before the symptoms are manifested by looking at particular stress genes or immune genes, or even in some cases, the proliferation of certain bacterial pathogens that are going to lead to a disease state.”

The hope is that “given enough warning, if we knew a coral was under particular stress, we might be able to manage or mitigate these factors. This is something that a lot of people are currently investigating at blighted coral reefs around the world.”

“My initial look-see into the Chagos brain coral has revealed some exciting things,” Wilson says. One was the abundance of the alga Ostreobium, which is uncommon. Another was the absence of Vibrio pathogens, which cause disease in many marine organisms. He also started to pick apart the microbial components using 16S ribosomal RNA panels to reveal the diversity of prokaryotes - bacteria and archaea, “which play an enormously important role in the functioning of a coral holobiont.” But the research has only just begun.
Looking to delve into the recipe of life?

Find out how QIAGEN various solutions for metagenomics can help.