Plasmids are generally prepared from bacterial cultures grown in the presence of a selective agent such as an antibiotic. The yield and quality of the plasmid DNA prepared may depend on a number of factors including plasmid copy number, size of insert, host strain, culture volume, and culture medium. 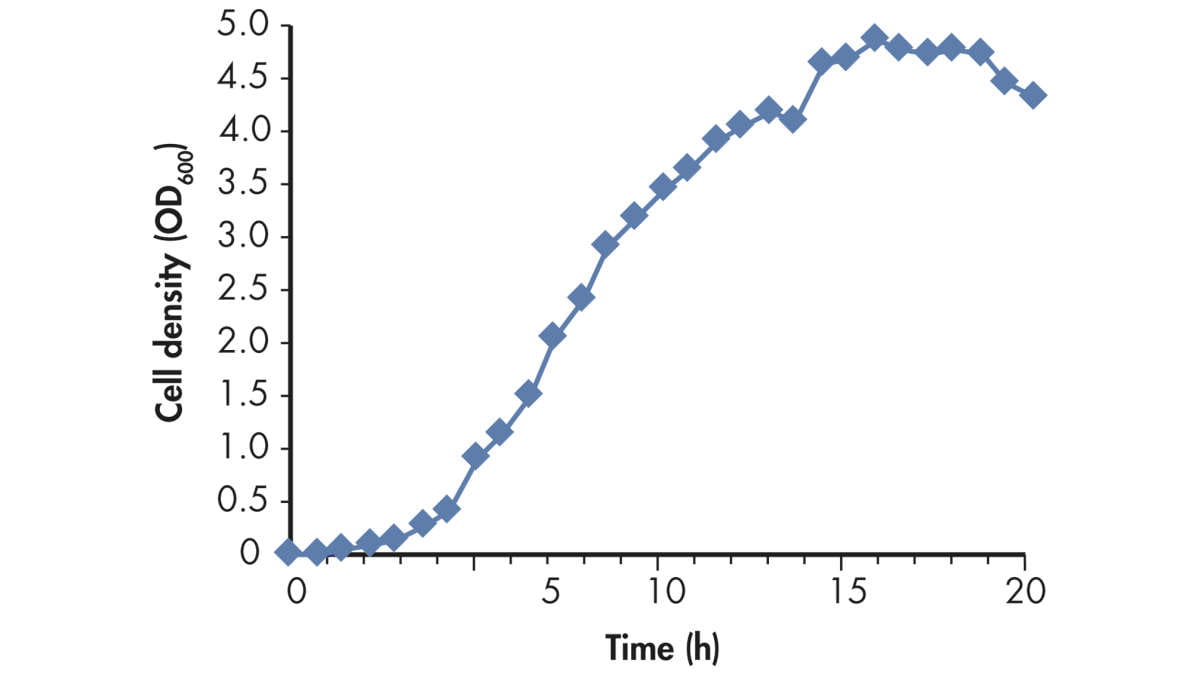 Plasmids vary widely in their copy number (see table Origins of replication and copy numbers of various plasmids and cosmids) depending on the origin of replication they contain (pMB1 or pSC101 for example), which determines whether they are under relaxed or stringent control; as well as the size of the plasmid and its associated insert. Some plasmids, such as the pUC series and derivatives, have mutations which allow them to reach very high copy numbers within the bacterial cell. Plasmids based on pBR322 and many cosmids are generally maintained at lower copy numbers. Very large plasmids are often maintained at very low copy numbers per cell.

Note: The copy number of plasmids and cosmids can be substantially influenced by the cloned insert. For example, a high-copy pUC plasmid may behave like a medium- or low-copy plasmid when containing certain inserts (e.g., very large DNA fragments), resulting in lower DNA yields than expected.

Origins of replication and copy numbers of various plasmids and cosmids

QIAGEN Plasmid Kits are also highly suited for purification of cosmid DNA. Due to their relatively large size and slow replication time, cosmids are generally present in low or very low copy numbers in bacterial cells (see table Origins of replication and copy numbers of various plasmids and cosmids). Like plasmids, cosmids vary in copy number, depending on the origin of replication they contain, their size, and the size of insert. Cosmids should be treated as low- or very low-copy plasmids when determining which QIAGEN-tip to use. To obtain good yields of very low-copy cosmids, it is often necessary to use culture volumes much larger than those normally recommended for use on QIAGEN-tips. A few changes in the procedure are necessary to obtain optimal results. See the detailed protocol in the QIAGEN Plasmid Purification Handbook. Cosmid DNA prepared with QIAGEN-tips is suitable for all applications including sequencing (manual or automated). For purification of P1 and BAC DNA using QIAGEN-tips, please contact our technical service departments or your local distributor.

Most E. coli strains can be used successfully to isolate plasmid DNA, although the strain used to propagate a plasmid can have a substantial influence on the quality of the purified DNA. Host strains such as DH1, DH5α, and C600 yield high-quality DNA with QIAGEN protocols. The slower growing strain, XL1-Blue, also yields DNA of very high quality which works extremely well for sequencing. Strain HB101 and its derivatives, such as TG1 and the JM100 series, contain large amounts of carbohydrates that are released during lysis and can inhibit enzyme activities if not completely removed. In addition, some strains such as JM101, JM110, and HB101 have high levels of endonuclease activity, and yield DNA of lower quality than that prepared from strains such as XL1-Blue, DH1, DH5α, and C600. The methylation and growth characteristics of the host strain can also affect plasmid isolation. If after performing a QIAGEN plasmid preparation, the quality of purified DNA is not as expected, a change of host strain should be considered. If difficulty is encountered with strains such as TG1 and Top10F', we recommend either reducing the amount of culture volume used for cleared lysate preparation, or using the same amount of culture volume but doubling the volumes of Buffers P1, P2, and P3 to improve the ratio of biomass to lysis buffers for optimized lysis conditions.

Bacterial cultures for plasmid preparation should always be grown from a single colony picked from a freshly streaked selective plate. Subculturing directly from glycerol stocks, agar stabs, and liquid cultures is poor microbiological practice and may lead to loss of the plasmid. Inoculation from plates that have been stored for a long time may also lead to loss or mutation of the plasmid. The desired clone should be streaked from a glycerol stock onto a freshly prepared agar plate containing the appropriate selective agent such that single colonies can be isolated. This procedure should then be repeated to ensure that a single colony of an antibiotic resistant clone can be picked. A single colony should be inoculated into 2–10 ml of LB medium (see table Composition of Luria Bertani medium) containing the appropriate selective agent and grown for ~8 hours (logarithmic phase). Using a vessel with a volume of at least four times greater than the volume of medium, the starter culture should then be diluted 1/500 to 1/1000 into a larger volume of selective medium, and grown with vigorous shaking (~300 rpm) to saturation (12–16 hours). It is often convenient to grow the starter culture during the day and the larger culture overnight for harvesting the following morning.

Antibiotic selection should be applied at all stages of growth. Many plasmids in use today do not contain the par locus which ensures that the plasmids segregate equally during cell division in the absence of selective pressure. Daughter cells that do not receive plasmids will replicate much faster than plasmid-containing cells and can quickly take over the culture. The stability of the selective agent should also be taken into account. Resistance to ampicillin, for example, is mediated by β-lactamase which is encoded by the plasmid-linked bla gene and which hydrolyzes ampicillin. Levels of ampicillin in the culture medium are thus continually depleted. This phenomenon is clearly demonstrated on ampicillin plates, where "satellite colonies" appear as the ampicillin is hydrolyzed in the vicinity of a growing colony. It is important to inoculate cultures from freshly prepared plates to ensure that the antibiotic is effective. Ampicillin is also very sensitive to temperature, and should be stored frozen in single-use aliquots. The table below gives the concentrations of commonly used antibiotics.

QIAGEN protocols are optimized for use with cultures grown in standard Luria Bertani (LB) medium (see table Composition of Luria Bertani medium), grown to a cell density of approximately 3–4 x 109 cells per ml. We advise harvesting cultures after approximately 12–16 hours of growth, which typically is the transition from logarithmic into stationary growth phase (see figure Growth curve of E. coli in LB medium). At this time, the ratio of plasmid DNA to RNA is higher than during the logarithmic phase. Also, the DNA is not yet degraded due to overaging of the culture, as in the later stationary phase. Please note the maximum recommended culture volumes given at the beginning of each protocol.

Several of the current bacteria strains can grow to very high cell densities. It is best to assess the cell density of the culture and reduce the culture volumes accordingly or increase the volumes of lysis buffers P1, P2 and P3, if necessary. A high ratio of biomass to lysis buffers will result in poor lysis conditions and subsequently low DNA yield and purity. If working with low-copy vectors, it may be beneficial to increase the lysis buffer volumes to increase the efficiency of alkaline lysis, and thereby the DNA yield. In case additional Buffers P1, P2, and P3 are needed, their compositions are provided in the handbooks. Alternatively, the buffers may be purchased separately.

It is not recommended to use super rich growth media such as TB (terrific broth) or 2x YT for most commonly used high-copy plasmids. Although TB or 2x YT have the obvious advantage of producing more bacteria (2–5 times), this does not necessarily lead to greater yields or higher-quality DNA.

If rich media must be used, the culture volume should be reduced to match the recommended cell biomass, which in turn should correspond to the capacity of the QIAGEN-tip used. If the culture volume used is too high, alkaline lysis will be inefficient, resulting in lower yield than expected. Furthermore, the excessive viscosity of the lysate will require vigorous mixing, resulting in shearing of bacterial genomic DNA and subsequent contamination of the plasmid DNA.

Growth curve of E. coli in LB medium: Host strain: DH5α; plasmid: pUC21. High OD600 readings were calculated by diluting the sample to enable photometric measurement in the linear range between 0.1 and 0.5 OD600.

Photometric measurements of cell density can vary between different spectrophotometers. The optical density reading of a bacterial culture is a measure of the light scattering, which varies depending on the distance between the sample and the detector. Calibration of each individual spectrophotometer is required to facilitate accurate conversion of OD600 measurements into the number of cells per ml. This can be achieved by plating serial dilutions of a culture onto LB agar plates in the absence of antibiotics. The counted colonies are used to calculate the number of cells per ml, which is then set in relation to the measured OD600 values.

Plasmid DNA preparations are free of any detectable proteins or other contaminants when purified on QIAGEN-tips according to the recommended protocol. DNA purified using QIAGEN, QIAfilter, or EndoFree Plasmid Kits gives excellent results with in vitro transcription experiments. Although a high level of RNase A is employed at the beginning of the procedure, it is removed efficiently by potassium dodecyl sulfate precipitation and subsequent washing with Buffer QC. It is possible, although not necessary, to omit RNase A from the procedure when purifying DNA for in vitro transcription. In this case, increasing the volume of the wash buffer (QC) is recommended (e.g., for a midi preparation on a QIAGEN-tip 100, use at least 6 x 10 ml of Buffer QC instead of 2 x 10 ml).