Soonmyung Paik, M.D, a leading pathologists in breast cancer research in the U.S. and South Korea, is recognized as a leader in the development of genetic tests to determine whether breast cancer patients will benefit from chemotherapy. But that’s not all. Professor Paik is also a scientist who knows first hand the research landscape in both western and emerging markets of Asia. For over 35 years, he has worked in medical research, first in the United States, then during the last decade more and more in South Korea. This appears to be no coincidence. Over the last years, South Korea – along with other Asian countries – has forcefully been entering the world stage in biotechnology.

You graduated from Korea’s Yonsei University in 1981. Why did you leave your home country in order to study in the United States?

When I was in medical school, Korea really didn’t have any research infrastructure worth mentioning. There was no government funding and medical school was for teaching. Being interested in medical research I decided to go to the U.S.

Aside from medical research I was still interested in working as a physician. I always wanted to have an impact on patient care. And I knew that in the U.S. I would have the option to do both.

Research careers rarely develop in a straight line. In my case, in the beginning I was actually interested in brain science and molecular biology. But I ended up accepting a residencytraining program at the National Surgical Adjuvant Breast and Bowel Project (NSABP) in Pittsburgh, Pennsylvania. It was more serendipity than anything else.

Almost every other school rejected me. The climate back then was extremely unfavorable to foreign medical graduates. Pittsburgh was one of only two hospitals that accepted me.

Did you start out doing genetic research there?

No. At NSABP from 1982 to 1984, I studied many, many slides of biological tissue trying to find chemical markers for different kinds of cancer. We were not dealing with molecular medicine at the time. 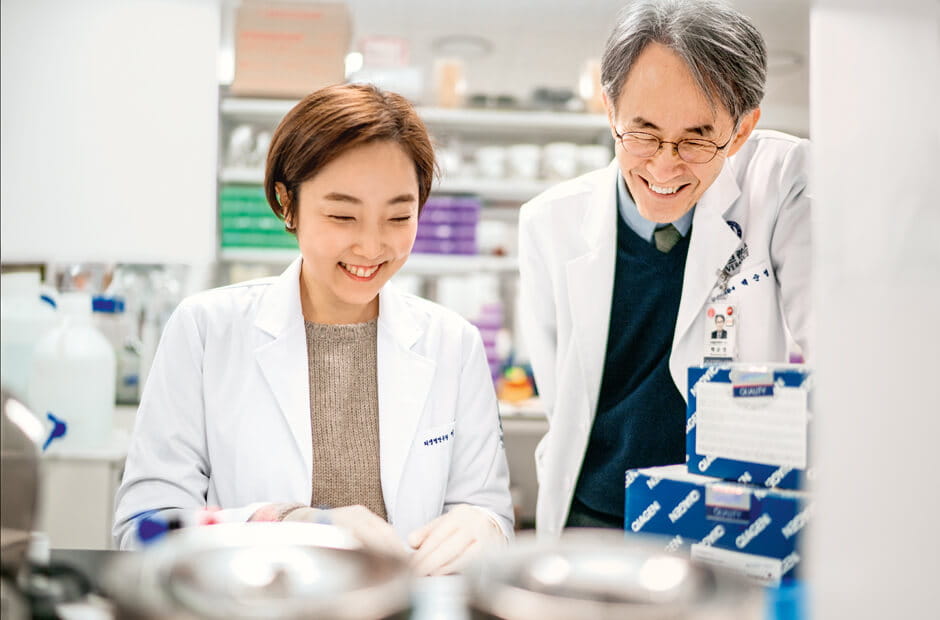 With 155 research institutes and more than 28,000 students, the Yonsei University is one of the most renowned colleges in South Korea.
icon-cta-blockquote2
I always wanted to have an impact on patient care.
Prof. Dr. Soonmyung Paik, Director of the Yonsei Biomedical Research Institute, Seoul, South Korea

When did genetic testing come up?

After three years in Pittsburgh, I wanted broader molecular training. So I decided to go to the State University of New York. First I did neuropathology, trying to find a molecular marker for HIV in brain tissue. We created a lot of plasmids using ultracentrifugation – each time, it took more than a week – and if QIAGEN’s purification kit had existed back then, it would have made everybody’s life a lot easier. At the same time, I became more interested in the pathology of breast cancer. So after two years I moved on – I worked in labs run by breast cancer researchers Marc Lippman at the National Cancer Institute and then at the Georgetown University. The focus of my work at those places was to develop tests for biomarkers in cancers that allow planning treatment. But I realized that the best way to do this was to work with the breast cancer tissue collections at the NSABP rather than using established cancer cell lines, and so in 1996 I went back as co-director and later director in pathology.


Is this when you developed the OncotypeDX test?

The idea of a test was always there, but it took until 2004 for it to see the light of day. It was based on many studies and clinical trials. The central idea behind it is that not all women with early-stage breast cancer benefit from chemotherapy. But some do. This test measures the expression of 21 genes in breast cancer tissue in order to discover who may benefit. It also gives an estimate for the cancer’s chance of recurrence.


Do you use QIAGEN products for this research?

Sure, we use them all the time, especially for nucleic acid extraction. QIAGEN sets the standard here. Can we even imagine extracting RNA from 2,000 cases using ultracentrifugation?


OncotypeDX sounds like an early step in the direction of “precision medicine.”

Yes, that’s true. But as popular as this idea is, today it would be much harder to develop. Back then, I could fairly easily evaluate a test in a clinical trial; today in the U.S. trials are under intense regulatory scrutiny after a cancer researcher at Duke University fabricated data. Thinking back, our work would have been much more challenging in the current environment.


Did this prompt you to go back to South Korea?

The connection was rekindled earlier. At the end of 1999 I was diagnosed with gastric cancer – and a colleague of mine at Yonsei University in South Korea was familiar with the operation. While I was still recovering in the ward, researchers from the oncology department asked me to help them with a grant application. South Korea had just begun to spend a lot more money on biomedical research back then. This one was for US$ 10 million for ten years. They got the grant and that started our collaboration. So once I felt that the research environment was gaining momentum, Korea became more attractive to me.

Can you do better research in South Korea?

Don’t get me wrong: There are problems here, too – for example, you have a genomics initiative pushed by the government, but it is mainly simply about sequencing. But you need more – sequencing should be tied to clinical trials for targeting genetic markers. We need a national infrastructure for clinical genome sequencing.

Yes. But currently the funding is too much tied to the idea of creating commercial products within two to three years, or to producing papers. A talented young researcher should not be constrained by that. I understand that a government has to justify expenditure, but they should think more long-term.


How does South Korea compare in biomedical research with other countries in the region, like Japan or China?

Japan is investing soundly as far as I can tell; we are at least a decade behind them. China is also doing well, as it has many researchers who were trained in the U.S. and are coming back and bringing an entrepreneurial spirit with them.