Food for thought – how do emulsifiers affect the human gut?

If not, you’re one of the many who appreciate convenience foods, which contain emulsifiers. Why use dietary emulsifiers? Well, the answer is that they’re key additives that improve the texture, taste, stability and shelf life of processed foods. But in 2015, emulsifiers came under scrutiny. They were the focus of a landmark study by Dr. Benoit Chassaing and colleagues that caused quite a stir in the scientific community and the media. The study observed that in mice, some dietary emulsifiers could change the gut microbiota and damage the mucus (epithelial) layer that protects the gut. Damage that led to gut inflammation and chronic disease (metabolic syndrome).

Since 2015, Dr. Chassaing and his team at INSERM (the French National Institute of Health and Medical Research) have continued their research journey into how specific emulsifiers can affect murine and human gut microbiota, as well as the intestinal environment. Dietary emulsifiers are nothing new – we’ve been enjoying them in mayonnaise and margarine for over a century. However, there’s been a huge escalation in the consumption of both natural and synthetic emulsifiers, due to the increasing popularity of processed foods, over the past 50 years.

“It’s well known that cases of inflammatory bowel disease (IBD) and obesity in humans have increased dramatically in recent decades in countries where the ‘western diet’ is the norm. So, a few years ago, we started investigating the impact of specific food additives on the gut microbiota,” says Dr. Chassaing. “Chemically, some emulsifiers can act like detergents and we found that two emulsifiers – carboxymethylcellulose (CMC or E466) and polysorbate 80 (P80 or E433) – affected the mucosal barrier in mice. That’s the gut’s protective layer that keeps food and gut bacteria at a safe distance from epithelial cells that line the intestine.”

Modifying the microbiome and breaching the barrier

In recent years, the INSERM team has focused on human relevance of these findings, as well as investigating more emulsifiers. The human gut and microbiota were simulated and maintained ex vivo using a MiniBioReactor Array (MBRA), an in vitro microbiota system. Every day, researchers measured the microbiota density, composition, gene expression and pro-inflammatory potential (bioactive lipopolysaccharide and flagellin levels, potent activators of the intestinal immune system). Moreover, as previously observed for CMC and P80, they found that numerous other commonly used dietary emulsifiers have varying impacts on human gut bacteria, especially carrageenans and gums. 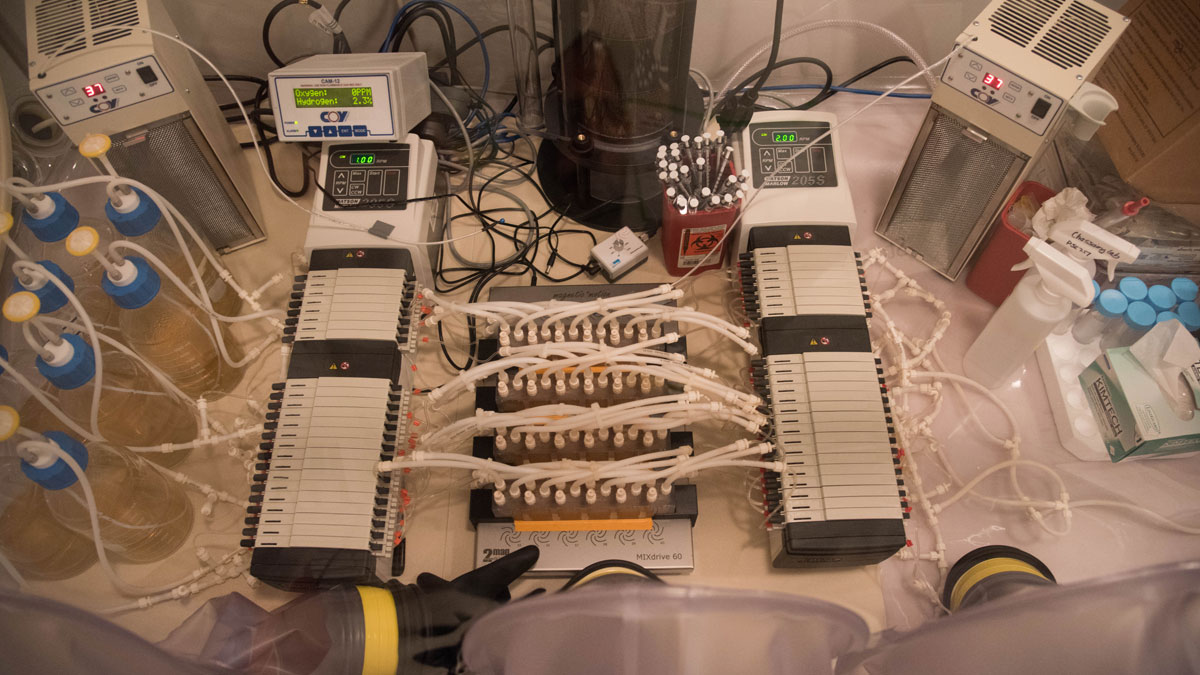 The MiniBioReactor Array used to investigate the impact of dietary emulsifiers on human gut bacteria. The next phase of the research is now underway with an in-patient clinical trial.

Good gut bacteria aid digestion and the immune system. At steady state, the lining of our intestine allows good bacteria to do their job and nutrients to be absorbed, while preventing any bacteria and pathogens from entering our bloodstream and promoting chronic inflammation. It’s the intestine epithelium that produces the thick mucus lining, and if this important no man’s land barrier is breached by changes in the microbiota, the immune system can be activated, which can lead to chronic intestinal inflammation.

A key part of Dr. Chassaing’s work is to look for ways to keep the microbiota healthy and develop therapeutic tools to prevent encroachment and reverse inflammatory disease. These tools could include fiber probiotics and immunizations, for example. Moving on from general microbiota composition changes due to diet, the main focus is now on bacteria function and localization – specifically which bacteria colonize the epithelial layer, inevitably leading to disease. Understanding the molecular pathways and mechanisms of how these relatively few bacteria are able to penetrate the mucus layer is crucial for therapeutic development.

The team relies on many QIAGEN products in experiments. These include kits like the QIAamp UCP DNA Micro Kit (an UltraClean Production kit that extracts tiny amounts of DNA from mucus in micro biopsies), the RNeasy PowerMicrobiome Kit and QIAseq FastSelect −5S/16S/23S. And to analyze thousands of samples in 96-well plates for microbiota composition, they use the high-throughput QIAcube HT instrument with QIAamp 96 PowerFecal QIAcube HT Kit and DNeasy 96 PowerSoil Pro QIAcube HT Kit.

icon-cta-blockquote2
All the QIAGEN kits we are using are highly reliable, and we benefit from strong commercial and technical support.
Dr. Benoit Chassaing

Alterations in the gut microbial community caused by diet have been linked to bowel disease, obesity-related metabolic disorders, diabetes and cancer. By changing the composition of the gut’s microbiota and weakening the intestinal barrier, specific emulsifiers might affect people who consume large amounts of processed foods or people who are genetically predisposed to develop inflammation-related diseases. In general, food-standard agencies regard emulsifiers like CMC and P80 as safe at the levels found in food. But we need to learn much more about how emulsifiers influence the intestinal microbiota, the epithelial barrier and our long-term health. Dr. Chassaing will continue his research with mice as well as through clinical trials, looking at individual microbiota-specific genes (biomarkers) and personalized nutrition, disease reversibility and foods containing multiple emulsifiers (synergistic effects).

If you are researching into gut microbiota and would like to try our kits, please mail ask.a.microbiome.scientist@qiagen.com (requests subject to availability). For automated workflows, you can also request a free instrument demo.

Principle investigator and research director, Dr Benoit Chassaing, leads a research team in his Paris laboratory, which is part of the French National Institute of Health and Medical Research (INSERM). His work aims to understand how environmental factors are involved in shaping detrimental microbiota, with a particular focus on intestinal inflammation and metabolic deregulations.

Dr Chassaing was a guest presenter at QIAGEN’s Human Microbiome Days, 2021. You can view his presentation here. 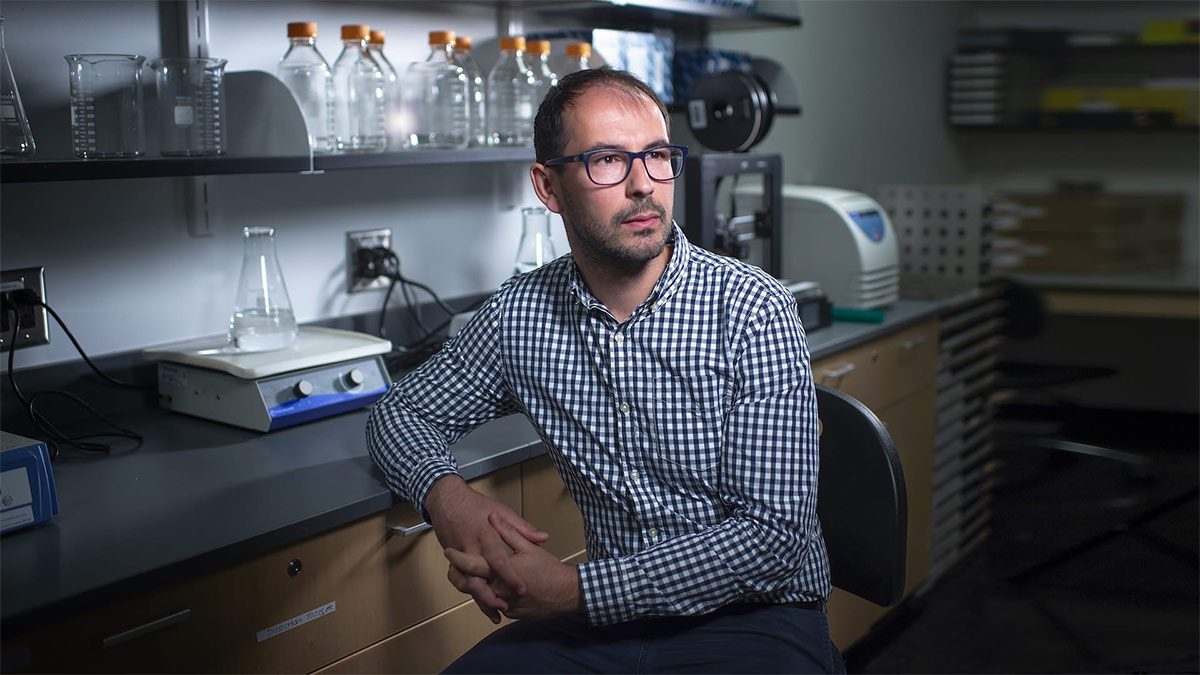