RNA is a biological macromolecule that serves a number of different functions. Messenger RNA (mRNA), transcribed from DNA, serves as a template for synthesis of proteins. Protein synthesis is carried out by ribosomes, which consist of ribosomal RNA (rRNA) and proteins. Amino acids for protein synthesis are delivered to the ribosome on transfer RNA (tRNA) molecules. RNAs are also part of riboproteins involved in RNA processing.

Noncoding RNAs are also important. These are functional RNA molecules that do not translate into proteins. Such RNAs include tRNA and rRNA, as well as small nucleolar RNAs (snoRNA), microRNAs (miRNA), short interfering RNAs (siRNA) and piwi-interacting RNAs (piRNA). They are often involved in the regulation of gene expression. 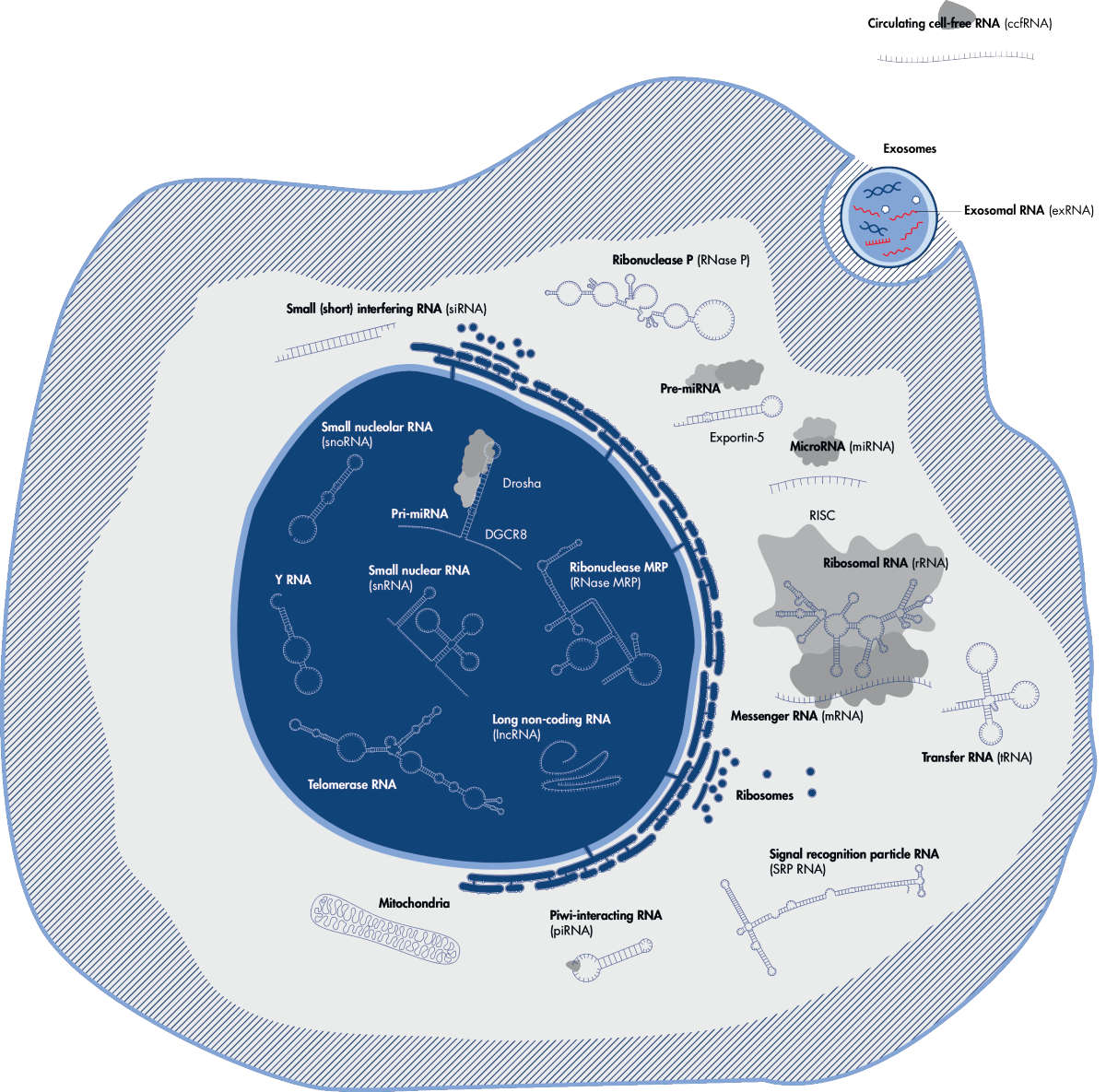 Explore the entire RNA universe in our new poster!

miRNAs play an important role in many biological processes, including differentiation and development, cell signaling, and response to infection. Overwhelming evidence indicates that dysregulation of miRNA expression is a cause or indicator of several disease processes, including many cancers. The discovery that cell-free miRNAs are detectable in serum and plasma, and that their expression varies as a result of disease, presents great potential for cell-free miRNA expression signatures to be used as biomarkers in disease diagnosis and prevention.

Both miRNA and siRNA pathways involve double-stranded RNA, but the source of these RNAs differs. Unlike the double-stranded RNA that triggers RNAi, miRNAs are encoded in the genome. Additionally, miRNA precursors (pre-miRNAs) are not completely double-stranded, but rather form hairpin-like structures that contain double-stranded regions. In contrast to RNAi, the miRNA pathway focuses on regulating the cell’s own genes. It is believed that humans have more than 2000 miRNAs, and they are estimated to regulate as over two-thirds of human genes.

The miRNA system is an endogenous mechanism of regulation of gene expression. Mature miRNAs contribute to the regulation of endogenous genes, primarily by translational repression. In addition, miRNAs can mediate mRNA destruction by rapid deadenylation and/or decapping. Naturally occurring miRNA-binding sites are typically found in the 3' untranslated regions (UTRs) of target mRNAs. In animal miRNA, partial complementarity has made positive identification of true binding sites difficult and imprecise.

Transfection of mimics, followed by downstream gene expression analysis or phenotypic analysis, is performed to elucidate the targets and roles of particular miRNAs. These experiments enable study of the biological effects of misregulation of individual miRNAs, as well as confirmation of specific genes as targets of individual miRNAs. Reduced gene expression after transfection of an miRNA mimic or increased expression after transfection of an miRNA inhibitor provides evidence that the miRNA under study is involved in regulation of that gene. Alternatively, the role of miRNAs in various pathways can be studied by examination of a specific phenotype following miRNA mimic or inhibitor transfection.

Downstream analysis of the effect of miRNA mimic/inhibitor transfection is often performed using one of the following strategies:

Small interfering RNA (more commonly known as siRNA) is involved in a number of biological processes — most commonly RNA interference, or RNAi.

Most RNA is single stranded; however, siRNA is made up of two complementary strands of nucleotides, similar to those in DNA, and is about 20–25 nucleotides in length. siRNA plays a role in the RNAi pathway, where it interferes with the expression of specific genes with complementary nucleotide sequence.

RNA interference (or RNAi) is a natural cellular process whereby cells 'turn down,' or silence, the activity of specific genes. Discovered in 1998, it is now a powerful tool in the study of gene function.

RNAi works by disrupting the messages carried by messenger RNA (mRNA) and therefore suppressing protein synthesis. Without the mRNA activity, a gene is essentially inactive.

Upon entering a cell, the double-stranded RNA molecules (siRNA) that trigger RNAi are cleaved into small fragments by an enzyme called Dicer. The small fragments then serve as guides, leading the siRNA to mRNAs that match the genetic sequence of the fragments. These cellular mRNAs are then cleaved, effectively destroying their messages and silencing the corresponding gene.

The process of RNAi is complex (see figure The process of RNAi). Double-stranded RNA is recognized by an RNase III and cleaved into siRNAs of 21–23 nucleotides. These siRNAs are incorporated into an RNAi targeting complex known as RISC (RNA-induced silencing complex), which destroys mRNAs homologous to the integral siRNA. The target mRNA is cleaved in the center of the region complementary to the siRNA resulting in degradation of the target mRNA and decreased protein expression.

The process of RNAi

siRNAs are the main effectors in RNAi and can be synthesized chemically or enzymatically in vitro. The design of an siRNA sequence is critical to effective gene silencing and designs are developed based on an understanding of RNAi and the naturally occurring siRNA function.

siRNA delivery is critical in such gene silencing experiments. Synthetic siRNAs can be delivered by electroporation or by using lipophilic agents. However, both approaches are transient. Plasmid systems can also be used to express small hairpin RNAs (shRNAs) that are substrates for Dicer and mature into siRNAs in vivo. Such systems enable stable suppression of target genes. Various viral delivery systems have also been developed to deliver shRNA into difficult-to-transfect cell lines.