A new frontier for PCR testing

Dr. Katja Sänger tests the NeuMoDx 288 Molecular System in one of the largest medical labs in Eastern Germany. Since the interview (February 2020), Dr. Sanger’s lab - like all diagnostic labs worldwide - has experienced an unprecedented surge in testing due to the COVID-19 pandemic, running more than 1000 SARS-CoV-2 samples each day in addition to their usual workload. This increased workload is expected to continue as countries encounter new waves of the pandemic and approach the winter season.

The next batch of blood samples is lined up for processing. Dr. Katja Sänger, biochemist and head of the lab, is just about to continue her test series on the hepatitis B virus (HBV) on the NeuMoDx* 288 with the new HBV Quant assay when she feels her phone vibrate inside her coat pocket. The pediatric intensive care unit of a local hospital is calling to have the blood of a premature baby tested for Hepatitis B. The neonatologist on the line needs to know how quickly the result might be obtained. "It will take less than 80 minutes," Sänger replies.

Sänger heads the Department of Molecular Pathogen Diagnostics at the MVZ Labor Dr. Reising-Ackermann & Kollegen in Leipzig, the largest owner-managed medical laboratory in East Germany. Each day, the laboratory receives approximately thousands of orders from doctors and hospitals for testing, the majority accompanied by several diagnostic requirements. This is a massive workload and the perfect environment for testing the NeuMoDx 288 Molecular System. Sänger is one of the first scientists in Europe trying out the advanced “Sample to Insight” system. The NeuMoDx 288 is housed in a small side room in the lab, its drawers loaded with consumables and the touch screen ready for the user to enter commands or see results. 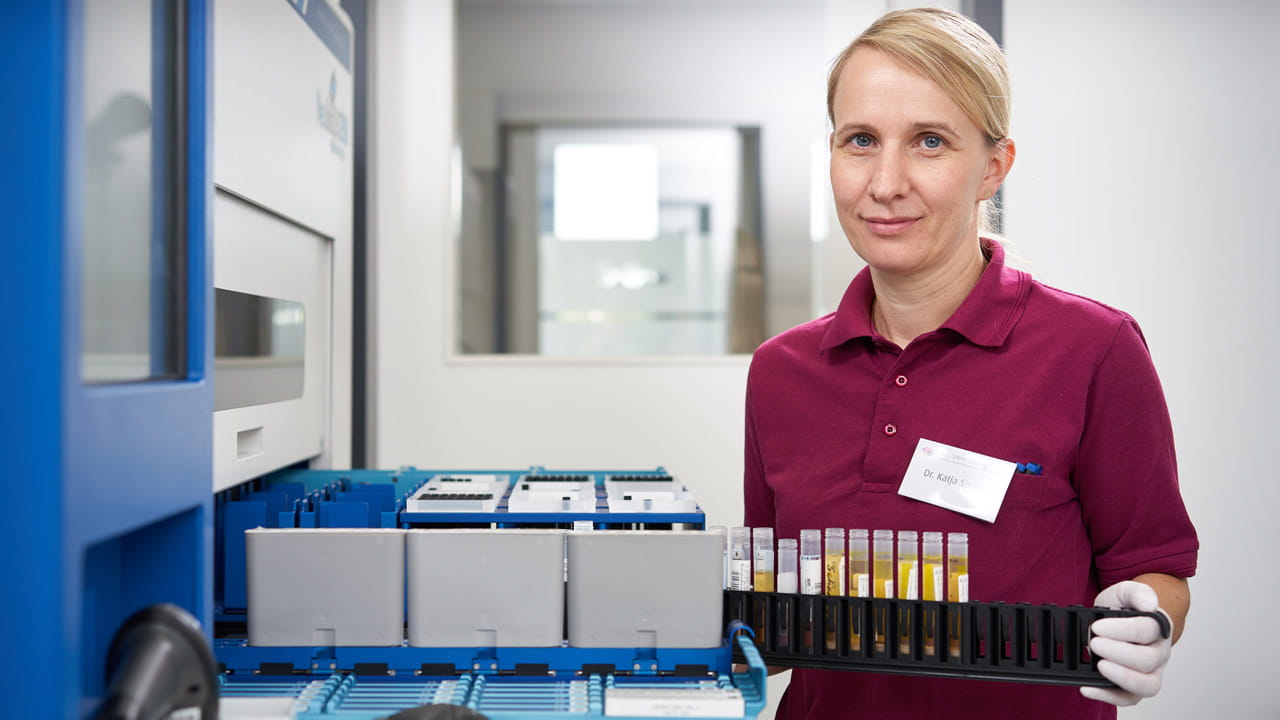 Dr. Katja Sänger joined the MVZ Labor Dr. Reising-Ackermann & Kollegen in Leipzig in 2005 with the mission of establishing a new department for PCR investigations – a laboratory she still heads today. Originally, Sänger wanted to become a medical doctor, but as a trainee in the hospital, she felt that her talents lay elsewhere. She started her career in research at the university hospital in her hometown and did her doctorate on target genes in cancer cells in tumor suppression before being recruited by the MVZ.
icon-cta-blockquote2
So far, the NeuMoDx test series has been consistently convincing.
DR. KATJA SÄNGER, HEAD OF MOLECULAR PATHOGEN DIAGNOSTICS LAB, MVZ LABOR DR. REISING-ACKERMANN & KOLLEGEN, LEIPZIG

Hundreds of samples per day

When Sänger started the laboratory nearly 15 years ago, there were practically no ready-to-use assays for use in patient samples, so the lab had to develop their own. "We had to produce most of the reagents ourselves as well,” she says. After the turn of the millennium, the volume of dangerous pathogens tested steadily increased. For example, practicing doctors now routinely test for Hepatitis B and C, chlamydia and HPV as a precaution. Sänger was hired to rebuild the laboratory to meet this growing demand. “As a young researcher, I was immediately attracted by this challenge,” she says.

Her team analyzes more than 200 samples on an average day, which includes tests for Hepatitis B and C, herpes, HPV, HIV, pertussis, chlamydia, gonorrhea, and influenza. If seasonal waves of influenza roll in, the number of samples analyzed dramatically increases to upwards of 800 a day.

Sänger’s expectations were understandably high when QIAGEN offered to install the NeuMoDx 288 Molecular System in her lab. The “288” stands for the number of samples you can load in one go – processing up to 340 tests in an 8 hour shift – completed automatically without any tedious preprocessing work. Sänger says, "This is a whole new approach."

Although the majority of pathogen tests have long been automated in Leipzig, "This device is able to prepare individual samples, extract the genetic information, and then analyze it on its own,” says Sänger. “There’s nothing else like it available on the market.” In the past, Sänger could only test samples for molecular diagnostic assays in batches for single pathogens, using kits in standardized quantities of 24 or 96. "But if I only have a few samples and an urgent request, I had to use the entire kit." The end result would be that the purchased additional controls (several per sample) would end up wasted. Because of the continuous random access capabilities of the NeuMoDx, samples can be run whenever they are received, no matter how many samples there are. 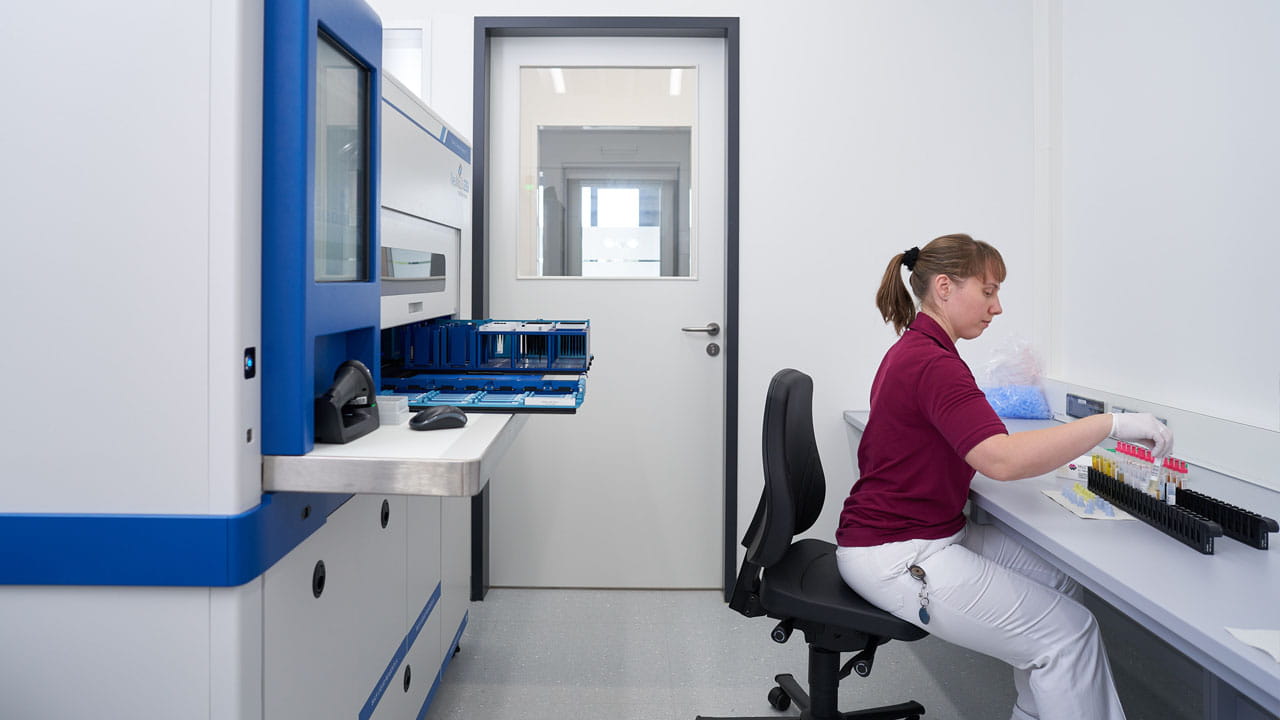 MVZ Labor Dr. Reising-Ackermann & Kollegen in Leipzig was founded in 1990 and currently has more than 1000 doctors in private practice and 40 clinics available to patients 24 hours a day, and is the largest owner-managed medical laboratory in eastern Germany. MVZ belongs to the "Limbach Group," an entrepreneurial laboratory network with over 30 locations throughout Germany.
icon-cta-blockquote2
For our molecular biological pathogen diagnostics, we use systems from only two suppliers – those which, in our experience, are reliable, easy to operate, and low maintenance. QIAGEN’s is one of them.
DR. KATJA SÄNGER, HEAD OF MOLECULAR PATHOGEN DIAGNOSTICS LAB, MVZ LABOR DR. REISING-ACKERMANN & KOLLEGEN, LEIPZIG

The new NeuMoDx system saves material and decreases waste, says Sänger. But, perhaps most importantly, it dramatically increases sample throughput and accelerates diagnoses, allowing patients to start time-sensitive therapies far more quickly. Unlike comparable systems, which take five hours to analyze samples, the NeuMoDx 288 can complete a virus load job, from preparation to detection and analysis, in about an hour, says Sänger. She adds, “Since it is able to test individually, I can even reload samples within a certain time window," which, she says, is absolutely unparalleled.

Over the past year, Sänger and her team have run countless CE-IVD assays such as chlamydia and gonorrhea alongside some laboratory developed tests (LDTs) for flu viruses on the NeuMoDx 288. When the research group tested the safety of the new system, the results were comparable to those which came out of existing laboratory technology. "So far, the NeuMoDx test series has been consistently convincing," says Sänger. In addition, the detection of pathogens can be achieved with less than 10 reproduced copies per extracted DNA, which provides extremely good value.

Sänger, like her colleagues, is thrilled that this new system makes handling of pathogens considerably less dangerous for them. "There are hardly any manual contact points left. And since reagents are delivered dried and have a long shelf life, our laboratory needs considerably less cold storage space.”

Once the installation and implementation of the software was completed, everyone in Sänger’s team knew how to operate the system successfully after just a single day of use. "It's practically self-explanatory," says Sänger. Once a German user interface is also an option, "it will be even easier.” 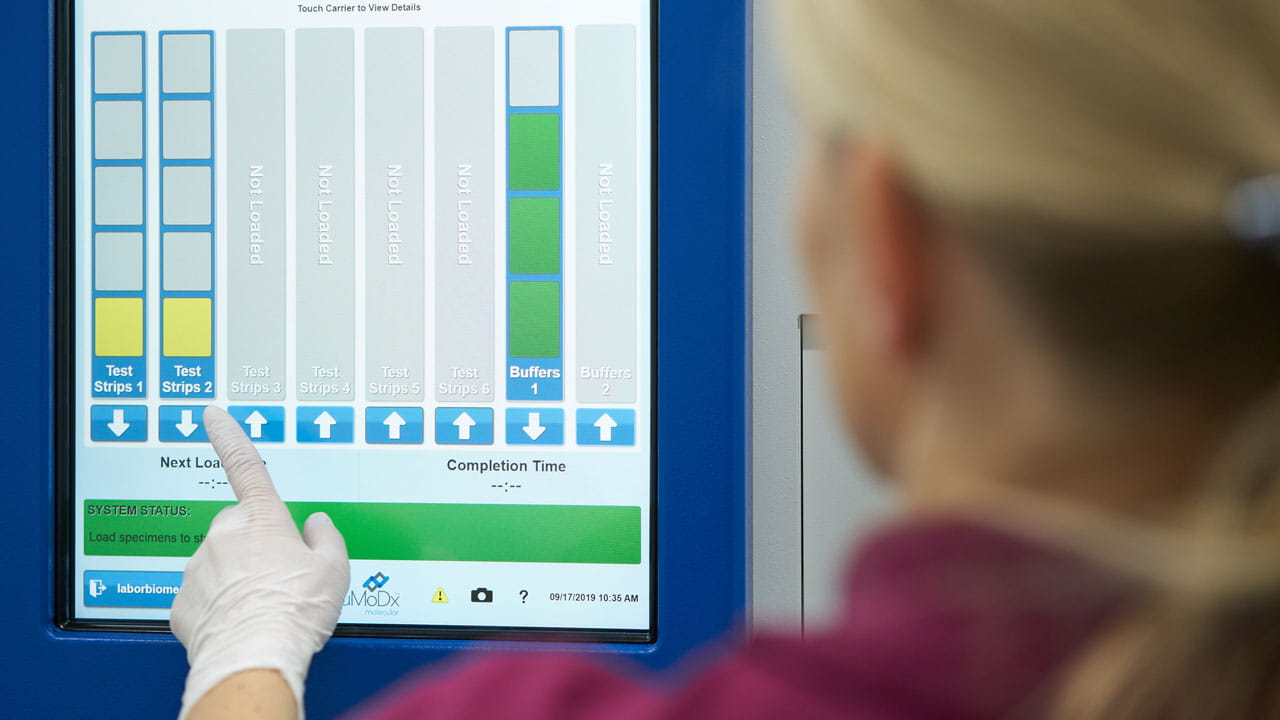 The NeuMoDx 96 and 288 systems offer a rapid and fully automated PCR test for COVID-19 that can deliver a result within an hour. A new multiplex test for influenza, respiratory syncytial virus (RSV) and the SARS-CoV-2 virus is scheduled for launch in the fourth quarter of this year. These solutions are ideal for use in hospitals or central testing labs which receive large numbers of patient samples.
In need of accurate and timely clinical laboratory results?
NeuMoDx Molecular Systems provide the industry’s first true continuous random-access solution.
LEARN MORE