Fighting a common and persistent killer

Tuberculosis is one of the oldest infectious diseases – and still one of the deadliest. Scarce funding threatens to hamper its eradication and has given rise to the threat of multi- resistant strains that demands new approaches in fighting the disease.

Dr. Delia Goletti spends every single day fighting an infectious disease that should not – on the face of it – be difficult to defeat. It is not a new virus, like HIV was in the 1980s or SARS was two decades later. On the contrary, the disease has been around for as long as mankind, and the bacterium at its root has been known for more than a century. It does not spread as easily as measles, rubella or influenza, but without treatment, its mortality rate is similar to Ebola’s. Yet, it is a disease that often goes unnoticed. As a matter of fact, the infection is harmless for most healthy individuals. But it is one of the most common chronic infections in the world and when it does cause vague symptoms weeks to decades later – mainly cough, weight loss, low-grade fever, and fatigue – its airborne flight infects 10 others and a long and difficult drug therapy is needed to cure it. Its name? Tuberculosis (TB).

Tuberculosis has reclaimed a spot among the top 10 killers globally. More than 1.6 million people succumbed to it in 2016, according to a World Health Organization report. More than AIDS, far more than malaria, disproportionately more than Ebola. And despite efforts to curb the epidemic, there were more than 10 million new cases worldwide in 2016.

"There are many reasons that make tuberculosis difficult to fight,” Dr. Goletti explains in her office at Italy’s National Institute for Infectious Diseases (INMI) in Rome. Good socioeconomic conditions are the best defense against Mycobacterium tuberculosis, the bacteria that causes TB, according to Goletti. The infection thrives in developing countries where malnutrition weakens the immune system of the poorest people. In most developed countries, improved nutrition and hygiene were enough to turn tuberculosis into a rare disease by the early 1950s. Which, paradoxically, led to a second problem: Wealthy nations focused on what seemed like more pressing health issues.

It was in Bethesda, Maryland, where Dr. Goletti spent four years at the National Institutes of Health, and where she first became interested in TB while working on the interaction between HIV and Mycobacterium tuberculosis.

“At the time we realized there was a new epidemic due to co-infection with HIV,” she says. By turning off the immune system, HIV paves the way for tuberculosis, which, in turn, helps HIV replicate faster, as Dr. Goletti helped show. The problem remains: About 370,000 people a year die from co-infection with HIV and TB. Globally, TB is the number one killer of people living with HIV.

But the main factor that keeps tuberculosis around is that scientists still don’t understand what happens between the moment the bacterium enters the body and – years or decades later – the disease wakes up or reactivates. “According to recent estimates, about one-fourth of the world population has a latent TB infection – a state during which the bacteria remain dormant and do not cause any symptoms – but only five to 10 percent of these individuals develop active TB,” Dr. Goletti explains. Apart from children or patients with a weakened immune system, this happens long after the infection. “Our goal is to develop easy and quick tests that can tell who has a dormant infection, who is progressing towards the active disease and who has active tuberculosis,” she says.

Dr. Goletti (on the right) taking time for a chat with patients - during the last years, more than 300 patients with TB were evaluated and treated at INMI, a referral institute for tuberculosis in Italy. As the head of the Translational Research Unit at Italy’s National Institute for Infectious Diseases (INMI) in Rome, Goletti is involved in HIV, TB and many other diseases.

Available tests are currently only approved to detect two stages of the disease: latent tuberculosis infection (LTBI) and active disease (TB). A diagnosis of active TB usually requires a microbial culture and an x-ray or a biopsy, if the disease affects organs besides the lungs. As for latent infection, the tuberculin skin test (TST), or Mantoux, has long been the most common way to detect it. But the century-old test has several disadvantages: it requires two visits to the doctor, its interpretation is highly subjective and error-prone. In addition, it can’t distinguish between an infection or a previous vaccination with Bacille Calmette-Guérin (BCG). “Though the BCG vaccine is no longer common in Western countries since it offers only limited protection against TB, it is still the most common vaccination in the world,” explains Dr. Goletti. “In Africa, everyone gets vaccinated within the first week of life.”

In the early 2000s, a new laboratory blood test reached the market. Called QuantiFERON, it requires mixing some of the patient’s blood with Mycobacterium tuberculosis protein fragments. The level of the immune response in the blood sample is used to determine if the patient’s immune system knows the bacterium from prior TB infection. The QuantiFERON technology, unlike TST, is not fooled by previous immunizations and is considered to be the most accurate test for TB infection. But currently it cannot distinguish a latent infection from active disease.

That is why Dr. Goletti keeps looking for approaches that would help to further distinguish the various stages of the disease. She heads a team of seven and sees about 15 patients a week. INMI is the reference center for tuberculosis in central and southern Italy, and takes in about 300 cases a year (mostly immigrants) including rare cases of drug-resistant TB.

“We’ve been looking for antigens that cause a reaction only during the disease, as well as antigens that only show up in latent infections,” she says.“We’ve been experimenting with different readouts, test formats, biological samples – for example, trying to use urine instead of blood.”

These insights contributed to the latest iteration of the QuantiFERON test, QuantiFERON Gold Plus (QFT-Plus). Previous versions only measured the activity of CD4 T-cells. But factors such as the HIV virus that directly kills CD4 T-cells impacts all tests that measure CD4 immune responses. “We had noted in past studies that CD4 is not the only important immune response involved in tuberculosis,” says Goletti. “There is also an important CD8 response.” The latest QuantiFERON test also detects a CD8 lymphocyte reaction. These “killer cells” attack the bacterium. QFT-Plus includes two test tubes: one equipped with antigens that provoke an isolated CD4 response, and a one in which both CD4 and CD8 reactions take place. Its main clinical application remains the indirect test for M. tuberculosis infection, the same as the previous test.

Research indicates the test has the potential to be suitable for patients with weak immune systems, in particular in patients with an HIV-TB co-infection. Historically, reliably diagnosing a TB infection in this group has been challenging because their CD4 reaction is frequently suppressed. A recent study in a Zambian TB clinic showed that QFT-Plus sensitivity is not affected by HIV status except in patients with severe immunosuppression.

What Goletti’s group has already proven is that a higher CD8 response is strongly associated with active and severe TB. The test’s CD8 response is strikingly different for mild or severe disease. Active disease and severe cases lead to significantly stronger CD8 reaction than mild tuberculosis disease; this response decreases after treatment. Which means if the result can be further validated clinically, QFT-Plus might have the potential to be used to monitor treatment efficacy, as a Japanese study suggested. 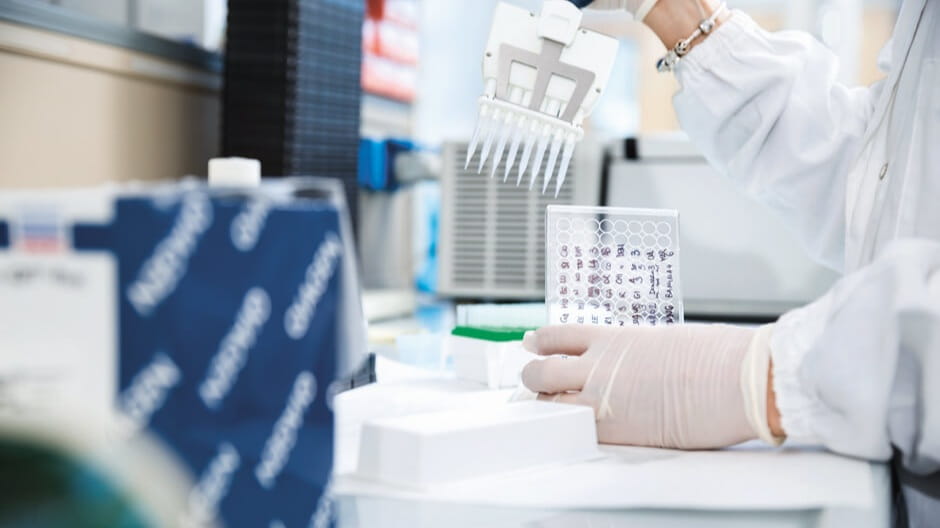 Every day, the translational research unit at INMI receives and processes several blood samples taken from patients in different stages of tuberculosis infection or disease.

Goletti’s lab is working with Professor Gian Maria Fimia’s group from the University of Salento, in Lecce, Italy. Their work shows that tuberculosis inhibits autophagy, the process by which a cell gets rid of unnecessary particles. By better understanding this process it might become possible to stage the disease and spot at-risk subjects. The study may also open up new therapeutic strategies. “We know that metformin, a drug routinely used for diabetes, increases autophagy,” says Dr. Goletti.

Another candidate “antigen of latency” is Rv-2628, a protein that Mycobacterium tuberculosis produces when it is starved of oxygen, as happens during latent infection. Dr. Goletti’s group found that when measured in blood samples, this antigen provokes a much lower response in sick patients with TB than in those simply infected. More important, it seems to offer a way to date the infection. It may be an important discovery because recently infected patients are considered at higher risk of developing the disease.

Yet the next breakthrough, according to Goletti, could come from analyzing gene expression profiles of LTBI patients. Early study results conducted in South Africa suggest that patients who are progressing to active disease, exhibit a specific 16 gene signature which could be used to identify those at risk and reduce the number of unnecessary treatments. While this approach still must be validated in larger clinical studies, it holds great promise for the development of novel predictive tests to improve the management of LTBI infections.

Dr. Goletti (third from right) puts a high value on collaboration and exchange within her team, consisting of Elisa Petruccioli, Linda Petrone, Germana Grassi, Valentina Vanini, Gilda Cuzzi, Teresa Chiacchio and Tonino Alonzi (from left to right, the latter two persons not shown in the picture).

All these new biomarkers and approaches to better understand TB may contribute to reaching the WHO’s goal of an 80 percent reduction in cases and a 90 percent reduction in related deaths by 2030. Most of the work will have to be done in developing countries – in particular, India and South Africa, but also Indonesia, China, Nigeria and Pakistan. But richer countries cannot afford the luxury to keep neglecting TB. The ability of TB infection to go unnoticed for years makes it an ever-present threat. “If you get infected at a young age, you will keep the bacterium in your system for long time, even 60 years,” says Dr. Goletti. As life expectancy grows, there are more and more things that can weaken the immune system and unleash the disease: biologic therapies used for cancer or rheumatoid arthritis, for example. Or simply old age.

The WHO global target is to reduce tuberculosis cases to just one per million inhabitants by 2050 – a 50-fold reduction. “In order to get there, we’ll have to treat latent infections more aggressively than we’ve done until now,” Dr. Goletti says.

Through more systematic testing in these countries, preventive therapy can be targeted. In low endemic countries – less than 10 cases per 100,000 inhabitants – most cases are due to reactivation of latent infections. For example, the majority of the patients Dr. Goletti sees at her Rome clinic are Eastern European immigrants, where latent infections are much more common. Other subgroups who are at risk include: people living with HIV, young children living with TB patients, patients on dialysis or starting an immunological therapy and transplant patients. And of course, a more accurate test will enable a more exact staging of the disease, increasing the chances of beating tuberculosis. 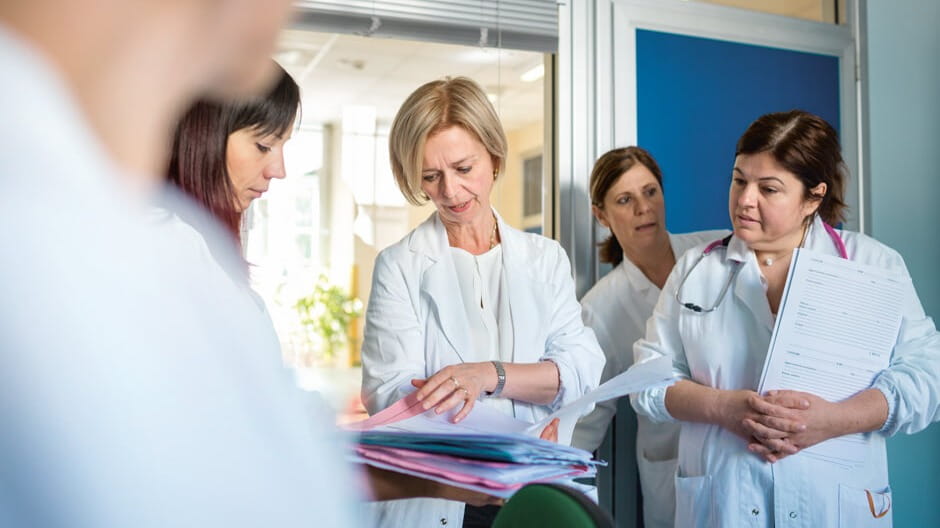 Ward rounds at the outpatient clinic directed by Dr. Fabrizio Palmieri. Once a week Dr. Goletti takes care of patients in the clinic next to the INMI research laboratories in Italy.
What is QuantiFERON-TB Gold Plus?
Find out more about an improved version of the industry-leading IGRA for TB detection, QuantiFERON-TB Gold Plus.
READ MORE