Tuberculosis does not discriminate. Many populations are vulnerable to TB, but anyone could have unknowingly been exposed. Regardless of the demographic. Two committed scientists separated by one vast ocean may test different communities in their regions, but they each rely on the same tool to quickly and automatically detect latent TB before it spreads to others, or develops into the active and highly contagious form of the disease.

Even in England and the United States, two of the richest countries in the world, there's a pressing need for latent-TB testing. Doncaster, a city in South Yorkshire, England, was founded by the Romans almost 2000 years ago and its historic market has operated ever since. Some of the newest Doncaster residents come from Eastern Europe, including traditionally migratory communities who are susceptible to the spread of respiratory disease due to close living arrangements. A distinctive red bus often drives through these communities offering free blood tests for latent tuberculosis (TB).

Dozens of tests are then taken to a microbiology lab at the Doncaster Royal Infirmary overseen by Michelle Poole, the chief biomedical scientist. "That means we have to ramp up our capacity in the laboratory quickly and massively," says Poole.

3000 miles away, at the Mako Medical Laboratories in Henderson, North Carolina, Kirsten Harding oversees latent TB testing in a much smaller town for a much broader swath of the US population. Clinics and research institutions in more than 40 states FedEx their samples to Mako every day, including samples to test for latent TB, which is concentrated in immigrant populations who likely acquired it before arriving in the US.

"We literally have positive test results here in the lab on a daily basis," says Harding, a clinical laboratory scientist and the quality manager for specialty chemicals division, "and yet the issue of TB almost never makes it onto the evening news."

Testing for latent TB and treating patients before the disease progresses to the highly contagious active form is the only way to stop the spread of the tuberculosis. “You could have tuberculosis and not have any symptoms,” explains Kristen Harding, chief biomedical scientist at Mako Medical, “and If your results aren't accurate, that means the patient is not getting the right result, which means that the doctor's going to diagnose the patient with the wrong diagnosis.” Often times individuals are shocked to find out they have tested positive, but that is the reason accurate testing is so important.
icon-cta-blockquote2
You could have tuberculosis and not have any symptoms. That's why people need to get tested for tuberculosis just as they do for any other disease.
Kristen Harding, Clinical Laboratory Scientist and the Quality Manager, Mako Medical

Poole and Harding have never met and took different career paths to the top of their respective labs. But both are now fighting the disease through molecular testing.

Poole began at Doncaster as a lab assistant more than 30 years ago when she was a young mom who simply needed a job to support her family. But she fell in love with the field, and soon earned her master’s degree. “There was so much to learn,” she says. “I really wanted to know and understand everything.”

Decades later, the thrill of discovery is still a core motivation for her especially because each molecular discovery brings deeper knowledge about a patient’s health. “Every infection is exciting in some way every sample, too. You never know what you're going to find in it, and the result invariably provides important information for the patient,” she says.

In North Carolina, Harding’s lab is a former abandoned building transformed into a state-of-the-art facility with a variety of divisions, including hematology, chemistry, microbiology, urinalysis and coagulation, and genomics. It’s where she uses molecular testing to illuminate the link between diagnosis and treatment. “At first I wanted to be a nurse, but science itself fascinated me so much,” she says. “I became a clinical laboratory scientist because I was interested in patient care. I wasn't so much interested in the hands-on patient care, but I was interested in the science behind all of the testing. I wanted to know the who, the what and the why of how the body works the way it does.”

Through molecular testing, she says, “I get to find out what's wrong with the patient and deliver those results to the physician. And in doing so, I feel I'm helping the patient get diagnosed correctly and get the care that they need.”

These two scientists working with two very different vulnerable populations separated by an ocean rely on the same solution: the DiaSorin LIAISON QuantiFERON-TB Gold Plus test, an in vitro assay to test for TB infection.

The fact that LIAISON QuantiFERON-TB Gold Plus testing requires only one visit helps enormously in settings like Doncaster. "The buses visit the community irregularly,” Poole points out, “so it’s unlikely that the technicians would encounter the same narrow slice of the population, making it that much more imperative to have an effective single-visit option.”

The automated workflow also lowers the potential for mistakes, Harding says. “The fact that employees have to carry out few processes with the LIAISON analyzer considerably reduces the susceptibility to errors. With LIAISON, everything that would otherwise have to be performed manually by our staff is already included in the DiaSorin reagent packs,” she notes. “It has your conjugate, it has your calibrator. It comes together in one box.”

The LIAISON analyzer can run up to 15 different assays at once and has a long walk-away time, freeing staff to perform other tasks. And unlike the traditional tuberculin skin test, which requires two patient visits and a wait of several days for results, the LIAISON QuantiFERON-TB Gold Plus test returns results in as little as 16 hours.

When it comes to latent TB testing, the previous platforms they’d used took more than 16 days for answers. “Today, with LIAISON QuantiFERON-TB Gold Plus, it takes barely more than 16 hours," Harding says. 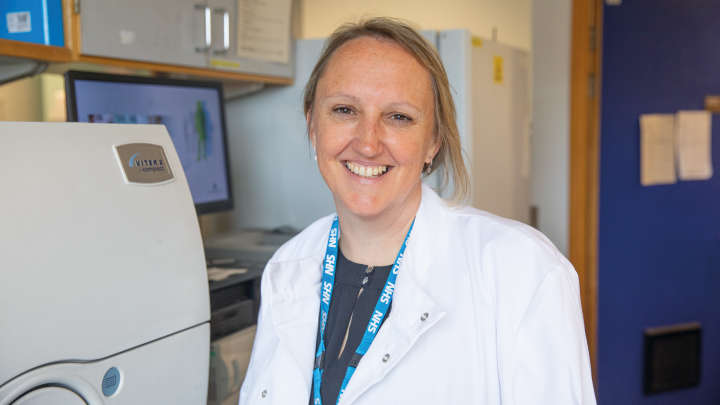 Michelle Poole is the chief biomedical scientist at the microbiology lab of Doncaster Royal Infirmary in Doncaster, South Yorkshire, England, where she has worked for three decades. “As soon as I started working there, I loved it. The thing about biomedical science for me is it's a way to help patients without actually being a nurse. It motivates me to this day that I get to help people in the lab every day.”
icon-cta-blockquote2
Since we've introduced the LIAISON QuantiFERON Plus, we've been able to provide the results sooner. We've got patients who have had their treatment earlier.
Michelle Poole, Chief biomedical Scientist, Doncaster Royal Infirmary

TB needs to be detected more frequently and faster because it remains a threat even if it’s overlooked in wealthier countries or overshadowed everywhere because of COVID-19, with which it shares several respiratory symptoms. Moreover, Harding says, “you could have tuberculosis and not have any symptoms. That's why people need to get tested for tuberculosis just as they do for any other disease."

This is especially important because TB disease can take years to develop but is easily treatable before disease develops. That’s been the case for some of the Doncaster residents tested by the TB bus, says Poole. “The staff from the TB bus were really grateful that we could provide that service, and could provide it in a timely manner, because by the nature of the patients that they're dealing with, it's quite transient.

Since we've introduced the LIAISON QuantiFERON Plus test, we've been able to provide the results sooner. We've got patients who have had their treatment earlier. They haven’t had to wait as we did previously, when we only batched and tested once a week. We're now providing results within 48 hours.” The more efficient the lab processes are, Poole says, the better it is for the patients.

Kristen Harding is a clinical laboratory scientist and the quality manager for specialty chemicals division at Mako Medical Laboratories in Henderson, North Carolina, US. “I always knew that I wanted to be in the healthcare field, but I wasn't sure what I wanted to do. I found out that working in the laboratory is probably the most prevalent for me because I like to know the who, the why and the what behind the science. You get everything here. You get patient care. You get the patient diagnosis. You get to work closely with the physicians.”
Together we can defeat TB