Ahead of her next destination, Liana reflects on her time at a yoga school in India and how to navigate the highs and lows of traveling during a pandemic.

Toward the end of your stay in France, it wasn’t clear where you would go next. Can you tell us what happened during this time?

Yeah, that was a stressful moment for me. My original plan was to go to Finland. I’d spent five months organizing it, and I was very excited to go. Finland has unique Nordic ferments and a recent emphasis on alternative dairy yogurt. However, the guidance from the Watson fellowship meant that I could only visit countries listed as safety level three or below by the US Travel Advisories. With the new Omicron variant sweeping through Europe, it wasn’t long before most countries, including Finland, went up to level four. So, at the very last minute, I had to change my plans completely.

That must have been quite a blow. What were your options and how did you decide?

My options were extremely limited for January. On the one hand, I was frustrated, but on the other, having fewer options was helping me focus. At the end of December, the only places I could visit in Europe were Sweden and Norway, but I had a feeling that they would soon also move to safety level four, so I started to look for options outside of Europe. India caught my attention since a lot of different fermented foods are used there, especially in Ayurvedic medicine. There are fermented dairy products, like curds and buttermilk, and doughs, such as dosa. I emailed several labs, but many didn’t reply because they were on winter break. Additionally, regulations in India are stricter regarding research visas, and one week was not enough time to set that up.

I thought my luck was about to change when I found a Grand Challenge proposed by the Bill & Melinda Gates Foundation. The challenge was to work on a study in India, looking at how fermented rice water impacts women’s microbiome during pregnancy. I emailed the PI, and he replied almost immediately saying, “Yeah, come in February”. It suddenly hit me at that point – there was no way I could arrange a lab placement for January. I had been so lucky to find my lab in France with two weeks’ notice, but that was back in November when COVID levels were relatively low. Finding a lab in India in one week during winter holidays, with Omicron at its peak, was not in the cards.

With your science plans on hold, what was your next move?

I had seven days left before January, and I started to reflect on why I was doing this fellowship. Ultimately I wanted to do some great research, but I also wanted to experience new cultures and learn new things. I’ve been practicing yoga for five years and I always had this grand idea that one day I would start my yoga teacher training. I considered doing it in the US, but it’s expensive, and I wanted a more traditional experience. So with no plan for the next month, I decided to make the biggest and scariest decision so far. I booked a flight to Rishikesh in India, the birthplace of yoga, and started researching yoga schools. Even though I felt excited, the whole time I couldn’t shake the feeling that something might go wrong.

How was your journey to India?

When planning a worldwide trip during a pandemic, I’ve learned to brace myself for pitfalls. Regulations change so quickly, and my entire plan can be thrown off in a single moment. This mentality applies to just getting between countries as well. Direct flights from Paris were too expensive, so I decided to buy a $500 ticket with two stopovers. The entire journey took 18 hours and involved endless security checks, a nail-biting wait for my PCR test result, and a frantic dash around Frankfurt airport looking for my luggage. When I finally arrived at the tiny airport of Dehradun, near Rishikesh, I discovered that I was completely off the grid. So there I was – a solo woman traveler in a foreign country without a working phone, getting into the car of a stranger who was holding a piece of paper with my name on it. If there was ever a time to take a few deep yogic breaths, that was it. 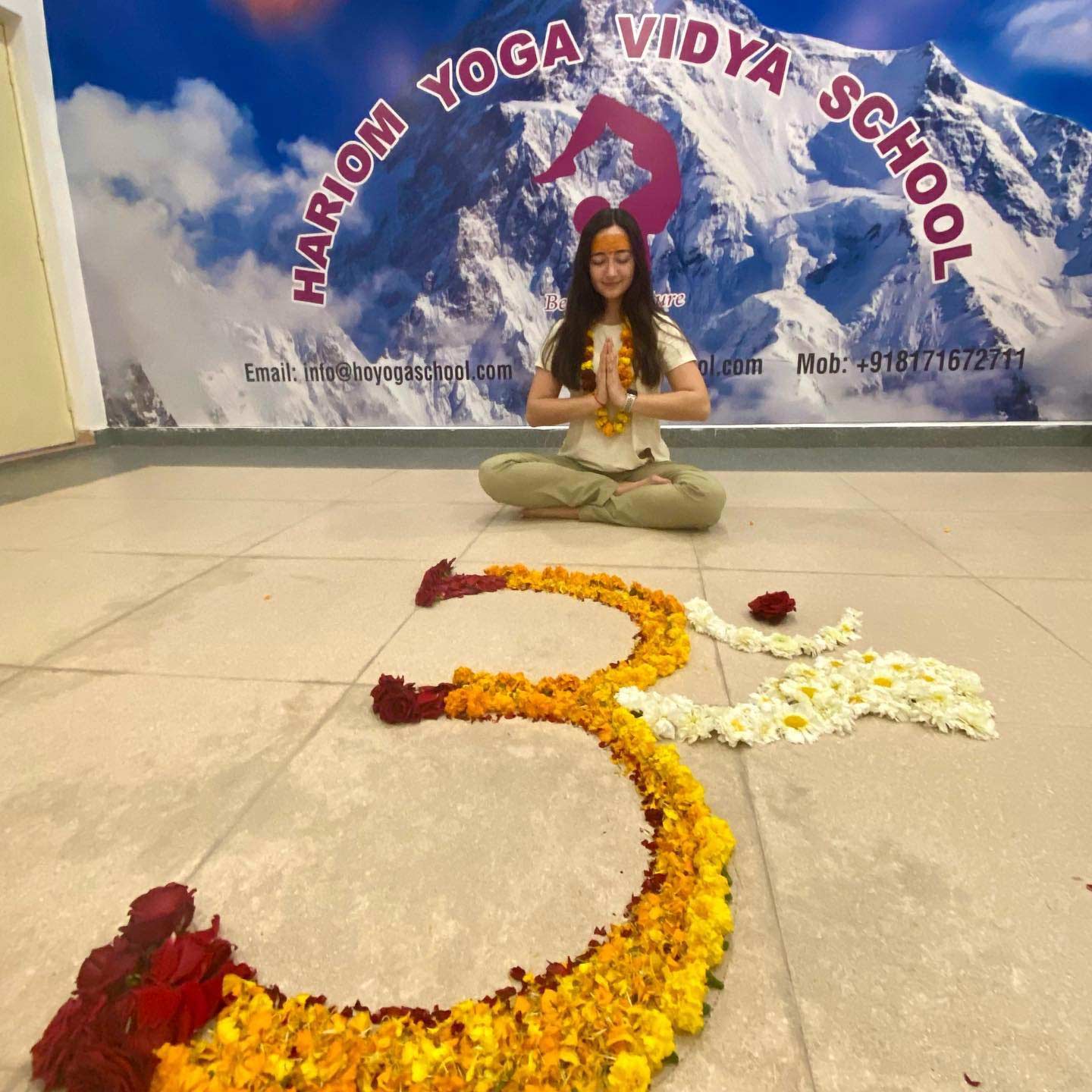 How was the rest of your experience there?

It was so amazing! It was a very meaningful and personal growth experience. It’s quite hard for me to put it into words because I still feel like I haven’t quite got my head around it. Each day started with an Ashtanga vinyasa yoga flow, followed by a traditional homemade Indian breakfast. We then spent the afternoons learning about yogic science and human anatomy. The other students in the class assumed I’d have an advantage here, but to be honest, I find that area of biology off-putting – blood, ligaments, bones – I’m not wild about it! I’m definitely a microbiologist at heart.

What did you learn from yogic science, and how did it challenge your views?

Yeah, it was interesting to see the mix of modern and yogic sciences. The teachers were very open, and I felt comfortable asking questions. Sometimes the answers were backed up with scientific studies. For example, how certain breathing techniques can affect the activity of the vagus nerve, a part of the parasympathetic nervous system. However, some answers were more philosophical. But it was good to be out of my comfort zone. I’ve spent the last 6–7 years intensely studying modern science, so it was fascinating to get out of that mindset and see how people outside of science think about the world.

Liana enjoys the sunshine as she practices yoga on the roof of the yoga school.

What was your most challenging experience?

A few weeks in, we all got sick. I suspected it was COVID-19, so I convinced the school owner to take me to the local hospital to get tested. I say “hospital”, but it was just a small house with a cow resting in the doorway. I went up to the window, put my face against the glass, and someone stuck a cotton swab up my nose before returning to the makeshift lab. I could see the nurse mixing my swab in a buffer in an Eppendorf tube, things that are familiar with my time in the lab. It was truly amazing that 24-hour PCR  testing has made it this far, to a tiny government hospital in Rishikesh. I was thankful and in awe at the work that these local healthcare workers have been doing throughout the pandemic. A steady stream of PCR tests, but also ailments of every kind. The doctor, Pooja, messaged me with my negative PCR result on Whatsapp the next day. It was definitely the most unique COVID test I’ve had so far!

What were your favorite moments?

Every Sunday was a rest day, so we planned small outings with the other students. On the first Sunday, we went to a lively bazaar in downtown Rishikesh and a river ceremony known locally as an Aarti. Everyone was having the best time, dancing and singing together in a large circle. It was a lot of fun and reminiscent of my Persian culture. The following Sunday, we went to The Beatles’ ashram. It was a little spooky at first because it’s now abandoned, and I could feel the energy of the hundreds of people who’d been there before us. We sat to meditate and take it all in. It was so peaceful and like nothing I’ve experienced before. On the final Sunday, we hiked to the top of the highest mountain nearby and looked out over the snowy peaks of the Himalayas.

Although I couldn’t do any lab work, I did get to try some new fermented foods and recipes. One particular favorite was Kanjee. For this, you leave the rice to ferment in water for 3–5 days. You then cook this with spices and vegetables. It’s not only healthy but absolutely delicious. Every morning I would walk into the kitchen, say hi to Rakesh, our cook, and open the top of the pot to check on the thickening rice water. In summers, this ferments in as little as one day with the stifling heat. Now, in low 40°F (4°C), it took five days. Sona, our yoga mom for the month, just had an intuition when it was ready.

That’s a theme I’ve noticed throughout my travels. People who produce fermented foods love what they do, and they have this parental-like care for the foods they ferment. They know what’s best for the ferment usually before even the most scientific readings of pH, microbial load or viscosity could tell.