A faster diagnostic option for meningitis and encephalitis

Despite advances in vaccines and other preventative measures, meningitis and encephalitis continue to claim lives across the globe. The expanded use of rapid, evidence-based diagnostic tools will be crucial for reducing the harm caused by these infections.

David M. had been dealing with a cluster of unusual symptoms, including a severe earache, headaches and vomiting, for 48 hours before his doctor conducted a lumbar puncture (1). From then, it was still a few days until his test results came back: David had bacterial meningitis.

Unfortunately, five days had passed between the 51-year-old from Glasgow’s first symptoms and the positive diagnosis. When doctors finally learned that David was infected with Streptococcus pneumoniae, they admitted him to the hospital, where he stayed for ten days. David’s hearing suffered for a few weeks, and he felt tired for some time after returning home from the hospital.

Still, David was lucky. He survived and today has no lasting effects from battling bacterial meningitis.

Around the world, about 2.5 million people contract bacterial meningitis each year (2). One in five cases results in permanent complications, such as hearing loss, brain damage and seizures (3,4). And without treatment, about half of patients with bacterial meningitis will die (3).

Even just a six-hour delay in treating bacterial meningitis can lead to an increased risk of mortality or long-term severe complications (5).

Early pathogen detection is critical in treating bacterial meningitis, as well as another central nervous system (CNS) infection, encephalitis. For both meningitis and encephalitis, swift, accurate diagnosis and treatment is crucial to preventing long-term complications and, in some cases, saving a person’s life (6–8).

Unfortunately, the traditional approach for diagnosing these CNS infections often takes many lab tests spread across multiple days. These conventional practices leave doctors in the dark and patients at greater risk while awaiting test results.

But multiplex syndromic testing offers an easier, faster and more accurate way to supplement the diagnosis of meningitis and encephalitis.
Unlike traditional diagnostic methods, like bacterial culture and microscopy, syndromic testing uses multiplex PCR to test for several pathogens at once – and it only takes around an hour.

The problem with traditional meningitis/encephalitis testing

Doctors traditionally rely on several different tests to diagnose CNS infections (9,10). These methods include:
Using these traditional methods alone presents a number of challenges to the diagnostic laboratorian, the clinician and the patient:

As clinicians wait on these tests for comprehensive results, they are unable to make targeted treatment decisions. But multiplex syndromic testing offers an additional molecular approach that can help detect a CNS infection in less time and with less effort than traditional tests alone.

What is multiplex syndromic testing?

The U.S. Food and Drug Administration cleared the first syndromic testing panel in 2008 (10). Since then, syndromic testing has become increasingly available to doctors for diagnosing various ailments, including CNS infections.

An example of a positive result, where two pathogens were detected in a patient sample. 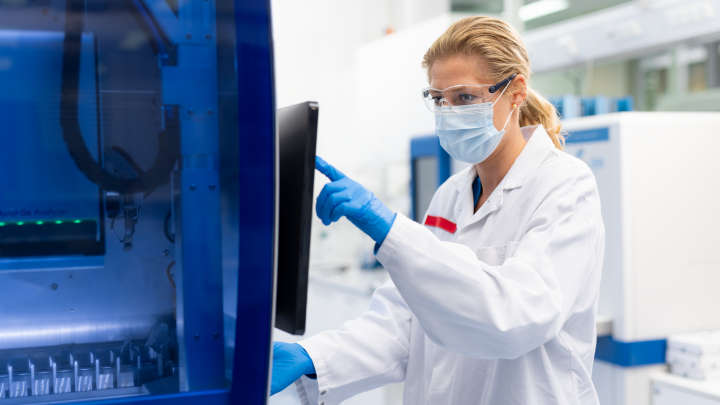 Looking for a rapid diagnostic tool that can detect and differentiate multiple pathogens at once? We have what you need.
Find out