Find every variant that matters

In precision medicine, only a handful of DNA variants are going to be relevant for a specific disease or a targeted treatment. Identifying these variants can be difficult, depending on the DNA sample, the specific gene or region and the methodology used to detect them. Next-generation sequencing can deliver precise and accurate information on variants within a DNA sample, but not all approaches are created equal.


Big picture or attention to detail

Whole genome and whole exome sequencing are excellent ways to profile a large portion of a DNA sample, but they aren’t relevant for every circumstance. Targeted DNA sequencing can get deeper into the data to detect low-frequency variants, while using a smaller amount of DNA. In order to perform targeted sequencing, an amplification step is required prior to sequencing, and there are two main approaches to this – single primer extension (SPE) or two-primer amplicon.

Problem with the status quo

Traditional targeted sequencing using the two-primer amplicon approach can be riddled with challenges. PCR and sequencing errors can limit the sensitivity and accuracy of calling rare mutations, and inefficient enrichment of GC-rich regions can limit coverage of clinically-relevant genes. Some regions may be over-sequenced while others are under-sequenced, affecting uniformity and making it difficult to call variants in low-depth regions. These problems can be linked back to ineffective PCR amplification approaches.

The PCR amplification process for the two-primer approach can result in primer dropouts, in which the forward and reverse primer interact, bind and the target is not enriched, causing coverage gaps. In order to design a two-primer amplicon panel, the target region must be defined, which means an increased risk of primer dropouts, lower uniformity and low library complexity. A solution to this problem is a single primer extension approach, or SPE. This eliminates the need for two region-specific primers. Instead, only one region-specific primer is needed, along with a universal primer. This results in higher uniformity, a complex library and improved coverage.

To test how these two approaches really compared, QIAGEN set out to do a head-to-head comparison of both approaches, looking at metrics for on-target reads (uniformity and specificity), coverage of GC-rich genes and ability to call rare mutations.

The results were enlightening. The QIAseq panel, which covered 275 genes (note: the panel can accommodate up to 500 genes total), had higher uniformity and specificity than Supplier TF’s panel, which covered 409 genes (Figure 1). However, since the number of amplicon mean coverage was almost triple that of Supplier TF, the reads were down-sampled to just 108M to better match Supplier TF’s panel. Even after down-sampling, the QIAseq Human Comprehensive Cancer Panel remained at a higher uniformity and had a higher number of on-target reads in the comparison (Figure 1). 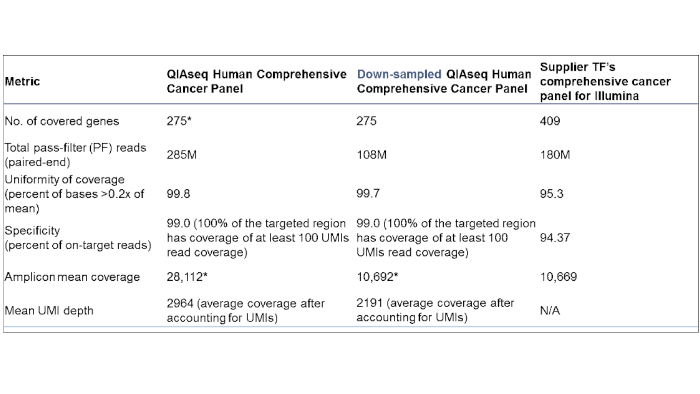 Figure 1. A head-to-head comparison. QIAGEN’s SPE approach outperforms the traditional two-primer approach.
After down-sampling, comparing the number of called variants was equally as eye-opening. The QIAseq panel showed that out of single nucleotide variants (SNVs), deletions and multi nucleotide variants, 41 out of the 42 variants were called. However, for the Supplier TF panel, only 18/42 were called, meaning only 30% of variants were called using a two-primer approach.

Another interesting finding was that the two-amplicon based panel had poorer coverage, resulting in the inability to profile clinically relevant genes, specifically NRAS exon 3 and CEBPA, a GC-rich gene relevant for acute myeloid leukemia. While NRAS has an expected frequency of 1.3%, Supplier TF’s panel detected 6.2–4.2%, but the down-sampled QIAseq panel observed a 1.27–1.81% frequency, better characterizing this important variant. While the GC-heavy gene CEBPA can present a challenge during amplification, the QIAseq panel was able to reach 100% coverage due to enhanced primer design, with the lowest mean coverage still above the 0.2x mean benchmark. On the other hand, the two-primer amplicon panel lacked comprehensive coverage across regions (Figure 2). 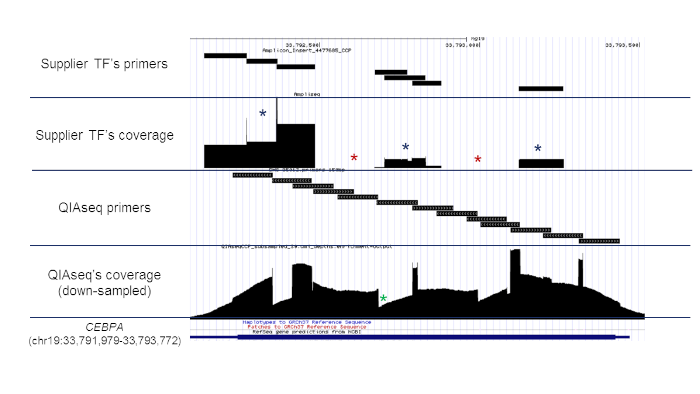 And the prize goes to…

The QIAseq Human Comprehensive Cancer Panel won hands down when comparing quantitative metrics for both panels. The QIAseq DNA panels outperformed Supplier TF’s DNA panels on uniformity and specificity, coverage of difficult genes and the ability to accurately call rare variants. In addition to the metrics in this study, the QIAseq panels require less hands-on time and feature a flexible design, making it easier when building a panel for regions or hotspots, or boosting an existing panel with more genes.

Do you have your own design in mind when it comes to targeted panels? Learn how to create a custom DNA or RNA sequencing panel and check out the online design tool at the QIAseq Design School: https://go.qiagen.com/QIAseqDesignSchool

Be confident when detecting rare variants in DNA samples – choose from curated panels, optimized for your research: https://www.qiagen.com/shop/sample-technologies/dna/genomic-dna/qiaseq-targeted-dna-panels/ 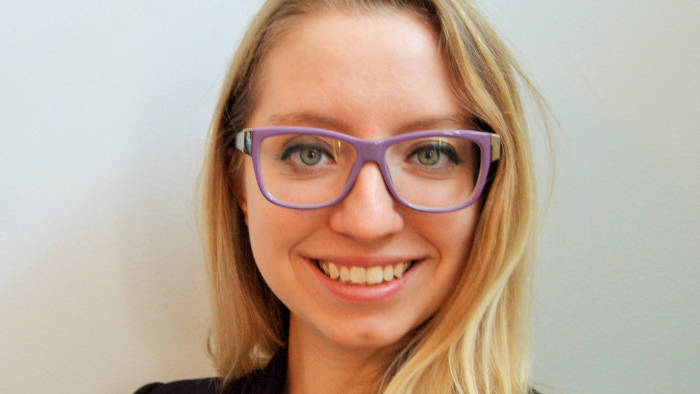 Christine Davis is a Global Market Manager for the liquid biopsy and NGS product portfolio. Christine joined QIAGEN in 2014 as a marketing specialist for life science research products, after working for several years in a genetic testing facility for rare hereditary disorders. She received her BS in Biology from Salisbury University in 2010 and is currently earning her MBA and MS in Bioinformatics at Hood College in Frederick, MD.