Testing sewage to halt a pandemic

While scientists have broken all records to find a vaccine and medical staff have put themselves at risk on the pandemic's frontline, a missing will to co-operate in the world at large has allowed COVID-19 to mutate, to revive and to continue its deathly spread. Additional early-warning surveillance is needed to help authorities fight the disease. And this is where wastewater testing comes in.

For the past two years, the COVID-19 virus has been playing a game of cat and mouse with the human race. To beat this virus - and help prevent the next one - a collective effort to ramp up global genetic surveillance is needed to spot the appearance and spread of new variants. One of the most promising and effective ways to monitor disease among a mass population is proving to be digital PCR in wastewater-based epidemiology (WBE).

To appreciate the potential of this method, let's take a journey back to the early months of the pandemic in March 2020. Researchers in China had just announced they could detect the SARS-CoV-2 virus in the feces of infected people. But what happened after the waste was flushed away to a wastewater treatment plant, where it mixed with the outflow from hundreds of thousands of toilets, sinks and drains? Were its genetic remnants still detectable?

With testing methods for COVID-19 still being developed, scientists were eager to find new ways to track cases to understand the scope of the pandemic. Dr. Warish Ahmed, a senior research scientist at the Commonwealth Scientific and Industrial Research Organization (CSIRO), Australia’s national science agency, saw a tweet from a University of Queensland researcher asking if anyone in Brisbane, Australia, could test for SARS-CoV-2 in raw sewage.

Since COVID-19 symptoms develop five to 14 days after infection, if researchers immediately test for RNA fragments in wastewater, they can learn of a person’s infection within a group before that person is aware they are ill. Of course, WBE can’t detect a single person’s infection in a large wastewater sample; but multiply that single case by a cluster of infections or an outbreak, and SARS-CoV-2 becomes much more apparent. And there are other surprising applications for this powerful monitoring tool as well.
icon-cta-blockquote2
By analyzing wastewater samples, we can identify hotspots and potentially infected people in the community.
Dr. Warish Ahmed, Senior scientist, CSIRO

Ahmed, whose lab specializes in microbial source tracking in water, otherwise known as MST, had long handled a variety of viral environmental samples from across Queensland. At the first reports of COVID-19 spreading outside of China, he had started work on an analytical method to detect SARS-CoV-2 RNA in wastewater, anticipating the value of an early detection system. The traces were bound to be minuscule when the number of cases was low, but he believed his highly sensitive molecular method could still detect them in raw sewage.

Ahmed tweeted that they should get in touch. Later that afternoon, three researchers from the University of Queensland rang him. As part of routine drug monitoring, hourly samples were already being collected at treatment plants handling wastewater from Brisbane, Queensland’s capital. From these, they created 24-hour composite samples, each murky container representing hundreds of thousands of people. All they needed was the test.

The samples arrived at the CSIRO laboratory the next day. After concentrating and then extracting the tiny amounts of RNA from the raw sewage, RT-qPCR tests found what they were looking for: faint but definite traces of SARS-CoV-2 RNA. Using a simple model, they roughly estimated that 171 to 1,090 people in the catchment area, which covers about 600,000 people, were potentially infected. It was the first confirmed evidence of SARS-CoV-2 RNA in wastewater in Australia, and, says Ahmed, “the results were proof this method could potentially be used to identify hotspots and infected people.” They had struck upon what might prove to be a cost-effective way to pool-test entire communities for the disease. When Ahmed and his colleagues published their proof-of-concept research, it created ripples in the scientific community. 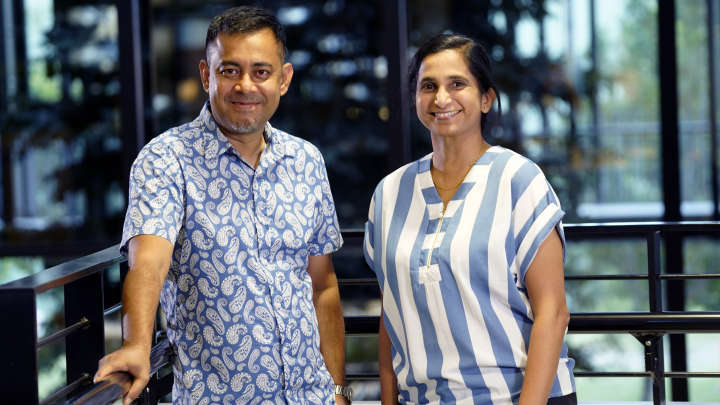 Dr. Warish Ahmed and Suzanne Metcalfe work in CSIRO Land & Water. Ahmed, a senior research scientist, enjoys troubleshooting problems, implementing new ideas and putting them to the test. “I have studied science since my childhood,” he says. “I wanted to have a Ph.D. in science, which was a very cool thing for a small-town boy from Barisal, Bangladesh.” He works with Suzanne Metcalfe, a research projects officer specializing in molecular biology and genomics. Suzanne has an MSc in Biochemistry and worked in medical pathology and university research labs before joining CSIRO. Prior to turning her attention to COVID -19 wastewater testing, she applied metagenomic techniques to monitor drinking water quality.
icon-cta-blockquote2
We were getting positive sample results from regions that no one suspected there were any cases.
Suzanne Metcalfe Research project officer, CSIRO

The future of WBE and COVID-19

Despite the availability of vaccines, there is still a need for public health agencies to survey COVID-19 circulation on a mass – and affordable – scale. “WBE is cheaper than individual testing, which costs about $75 per person and gives just a snapshot of a single person at a particular time,” Ahmed says. “If you monitor wastewater, you can potentially screen 100,000 people by analyzing one sample.” Metcalfe adds that "our objective is to basically pick up one infected from one hundred thousand people."

When the COVID-19 infection numbers are finally reduced, it will become harder to detect in the wastewater, as the viral concentration will be very low. Their solution, Ahmed says, “is incorporating other sensitive detection methods – for example, the QIAcuity.” QIAGEN’s QIAcuity nanoplate digital PCR system is designed to find such faint genetic signals. It partitions the sample into 26,000 individual reactions, making it far easier to pinpoint a single positive. Ahmed says, “We believe digital PCR is going to increase the sensitivity at least five- to ten-fold.

Australia is not the only country using this method. Surveillance testing allows public authorities to collect data from broad sweeps of the population, including people who are not reflected in public-health statistics because they lack access to healthcare. Currently, 70% of all U.S. states are using QIAcuity for ultra-sensitive wastewater detection of SARS-CoV-2 infections, for example. And as COVID-19 is becoming endemic, testing needs will increasingly shift from detecting viruses to monitoring the spread of infectious diseases. 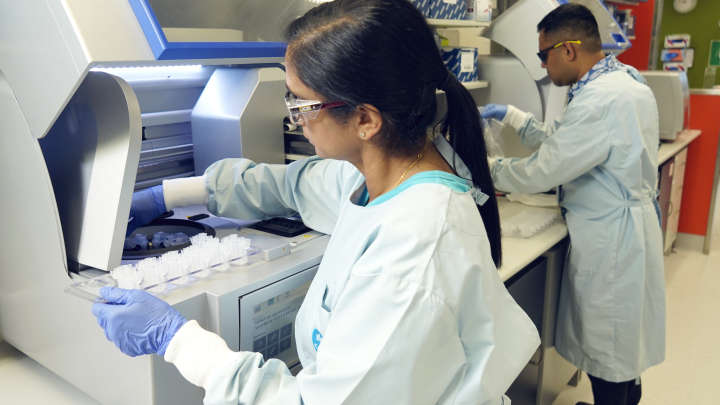 Surveillance testing can potentially reveal dynamic changes in infections – and mutations – earlier than traditional diagnostic testing, providing public-health officials with near-real-time data about the presence and intensity of the disease. WBE is also being explored for smaller-scale monitoring: sampling wastewater from nursing homes, retirement villages, cruise ships and planes. For example, “We were able to report back to Qantas on which planes came in with positive samples,” says Metcalfe. “Samples were collected from aircraft following outgoing passenger-free and incoming repatriation legs of the journey." Wastewater monitoring results indicated ~90% accuracy of detecting COVID-19 tested by analyzing waste.
Liters of wastewater are being transformed into a sea of information
What do these surveillance tools mean for your research?
Find out more