Els van der Goot, PhD student from the University of Groningen in the Netherlands, is building connections, bridging the gaps in knowledge between behavior, biology and the microbiome. Her passion for neurobiology and how behavior is influenced by the microbiome has made some intriguing findings in mice with metabolic and neurologic disorders.

How did you first get interested in science and microbiome research?

I took a year off after high school to figure out which direction I wanted to continue my education in. During that year, I came across the website for the bachelor of Life Science and Technology at the University of Groningen (UoG), which triggered my attention with phrases like “Did you always want to know how cancer develops?” and “Do you want to use your knowledge to improve people’s quality of life?” I always liked puzzles, so I decided to attend the “Student for a Day” program which meant we were given a lecture and shown some behavioral research practicals, after which I decided that’s what I wanted to become: a biologist. After my studies, I was allowed to work with Professor Dr. E. A. van der Zee, with whom I worked on behavioral and cognitive deficits in mice with the metabolic disorder phenylketonuria (PKU). During this time, we discovered the potential of the microbiome to influence behavior and under the supervision of Professor Dr. E.A. van der Zee and Professor Dr. J. Falcao-Salles, I wrote a project proposal for the Adaptive Life program and received a PhD-bursary position.

Can you give a summary of your current project?

My project tries to unravel the link between the microbiota, brain and behavior in mice with PKU. PKU is caused by a deficiency in the hepatic enzyme that converts the essential amino acid phenylalanine (Phe) into tyrosine, leading to high levels of Phe in the blood and brain which, when untreated, leads to severe intellectual disability, motor performance, anxiety, depression disorders and epilepsy. The current treatment is a strict Phe-restricted, protein-free diet with amino acid supplementation, which can prevent the most severe symptoms, although research shows that the gain of the diet remains suboptimal for the patients. Additionally, alterations of gut microbiota are likely to occur in response to this metabolic disorder since the treatment consists of drastic changes in dietary intake and diet and environment are known to affect the microbiome.

The microbiota itself has been implicated in the evolution of social behavior and developmental programming of the brain, affecting social and cognitive behaviors. A paper in 2011 demonstrated that strain-specific behavioral profiles could be transplanted by interchanging the microbiota between strains. For us, this was a potential game changer as we have been working with PKU mice, in which we also found the behavioral phenotype to be different between strains regardless of having an identical mutation responsible for PKU. Therefore, we now aim to study the impact of the microbiome in PKU mice and how it affects their behavior and ability to master learning tasks.

In addition, by manipulating the gut microbiota we will be able to understand in more detail the evolutionary developments between the microbiome and brain functioning: has (part of) the gut microbiota adapted to the PKU environment? How can we employ alterations of the gut microbiota to influence behavior, with emphasis on improving cognition and anxiety/fear in a PKU environment? From an evolutionary perspective, the Phe-restricted diet taken by PKU patients selects against bacterial species capable of degrading Phe. By increasing Phe diet contents in our experiments we will increase the selection pressure towards this type of microbes, which can be used as probiotics. 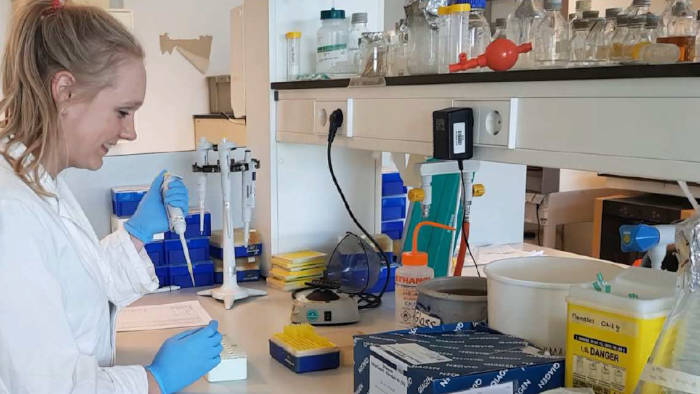 What will be a typical day for you in the lab?

Every day is quite different from the other! During experiments I spent most my time in the animal facility, being busy with breeding, cleaning, feeding and doing behavioral tests with my mice. Next to that, I often supervise masters and undergraduate students, and divide my time between analyzing the (behavioral) results and lab work, which generally involves DNA extractions for genotyping and microbiome sequencing and immunohistological staining for brain markers for learning and memory. Lastly, I attend weekly lab meeting for both the molecular neurobiology and microbial ecology group to discuss important issues and share results and ideas.

I was really excited when I first read the paper in which they exchanged the microbiome in two strains of mice and with that, exchanged their strain-specific behavior! Therefore, the most interesting part about the project would be being able to replicate and expand this in our PKU mice – exchanging the microbiota of our “diseased” mice with our non-diseased control mice - and see whether the behavior is (partially) caused by changes in their microbiome (our earlier studies revealed a dramatic difference in microbiome between the PKU and non-PKU mice within a nest) as a result of their metabolism and diet. As we have just started the project, we unfortunately do not have results on the behavior, but are in the process of analyzing our first data.

What kind of microbiome research do you perform and how does it impact health and disease or the environment? Where do you see this heading in the next five years?

In the end, we want to manipulate the microbiome and try to develop knowledge and insights to be used in the field of “evolutionary medicine” that can improve social and mental health in these mice. This principle could then be translated to human applications and perhaps even other (metabolic) diseases and general health. It is a growing field and I think that in the next five years we will have significantly increased our understanding of the symbiosis between hosts and their microbiome and we probably will have learned that we are more dependent on our microbes than we could have thought.

What are your hobbies?

I played volleyball when I was younger, but during my master internships, I decided it took too much time. I started again two years ago and this year we even signed up for a recreational competition. Next to that, I love to play video- and board games, especially when it involves strategy games or general role-playing games.

What are the major challenges you face in your research with regards to sample collection, nucleic acid isolation and data analysis?

I think the biggest challenge for me is that I’m trained as a neurobiologist and have to learn a whole new expertise while being one of the first PhD-students in our university to form a bridge between the molecular neurobiology department and the microbial ecology group. Concerning the data analysis, I’m currently being trained in bioinformatics for my first microbiome analysis, which is challenging per se, but it will also be quite challenging to interpret the complex data correctly. However, I’m excited to see the first results and learn new things.

Which MO BIO or QIAGEN products do you use/have you used in the past and what did you like about the products?